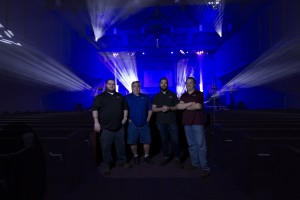 In 2013, in an on-going effort to reach out to more people and at different levels, Ward began to offer four different worship styles in three different venues, all on the same campus. When a contemporary service was launched, Bryan Guelzo was brought in as part of a full A/V renovation. “When the current building was built about 15 years ago, no one had dreamed that Ward would be holding a contemporary service, let alone shoot HD video, Imag and stream services online,” stated Bryan, who has worked as Ward’s full-time AVL Engineer since July of 2014, working alongside Austin Germain (Director of Production for Worship), Billy Petty (Director of Worship) and Gerry Kropf (Broadcast Coordinator).

“The Sanctuary was built for traditional services. Audio and video systems were adequate for the needs Ward had at the time but stage lighting was virtually non-existent.”

With audio and video well in hand, Ward staff decided to turn their attention to the stage lighting, which consisted of a handful of conventional PAR cans and some ellipsoidal fixtures, both of which were in need of some serious attention as half of them no longer functioned, according to Bryan. Ward had no moving lights and no color other than a handful of generic washes. The need for an upgrade of the lighting system was extremely apparent if they were going to significantly enhance the worship experience.

“I have some experience with lighting, but it certainly wasn’t my forte so I called Elation,” says Bryan, who asked who in the area would be good to partner with for design work, products, support and especially training.  “Elation put me in touch with integrator Fantasee Lighting in Belleville, Michigan . Fantasee came in and took a look at our existing equipment, learned a lot about what we do here and our unique circumstances.”

Fantasee specified, installed and focused the new system and also repurposed the venue’s existing lights. Fantasee’s Colin Brandt oversaw the project along with Nate Mulvihill. “The church was looking to add some pizzazz for their contemporary service, while still maintaining a clean look and profile for their traditional services,” he comments. “They wanted to maintain the look and feel of the current system yet have a quick and easy add-on/install that gives them the tools for future expansion.” The Platinum Spot LED Pro’s and Rayzor Q12Z’s LED engine was a huge factor in their choice, he says. “They have a very busy production staff and wanted easy-to-maintain yet full-featured units. Comparing price and features, the Platinum Spot LED Pro couldn’t be beat, and the Rayzor Q12Z has the punch and zoom to do a lot of work. The eye candy effect was a nice selling point as well.”

To finish off the project, Fantasee also refurbished and re-focused all of the Church’s existing conventional fixtures to be used as stage wash, leaving the new movers to be used for effect lighting.

The Platinum Spot LED Pro’s built-in EWDMX wireless DMX receiver was a big hit for Ward as they wanted the ability to reconfigure their space quickly and easily, as well as repurpose the fixtures to other locations in the future. “The wireless DMX built into the Elation products was a huge factor in the decision to go with Elation,” Bryan comments. “At Ward, we hold the Contemporary service at 9:30am and the Traditional service at 11:00am. This leaves us less than 30 minutes to completely strip the stage of all traces of a contemporary service and set it up for the Traditional service.  With up to 10 movers and 4 hazers on the stage for contemporary service, not having DMX cables to clean up is a big time saver during our between-service transitions.” Each overhead beam is fed switched power to the fixtures from constant power circuits in the dimming system. DMX comes directly from wireless to the Platinum Spot LED Pros and feeds out from them to the Rayzor washes.

Fantasee was able to work around the church’s holiday program practices and maintain a working light system on the off hours. “Fantasee was able to design a system that perfectly fit what we were trying to accomplish,” says Bryan. The entire project was completed on time and under budget which allowed the church to recently order eight of Elation’s new SixPar 100 PAR color changers.