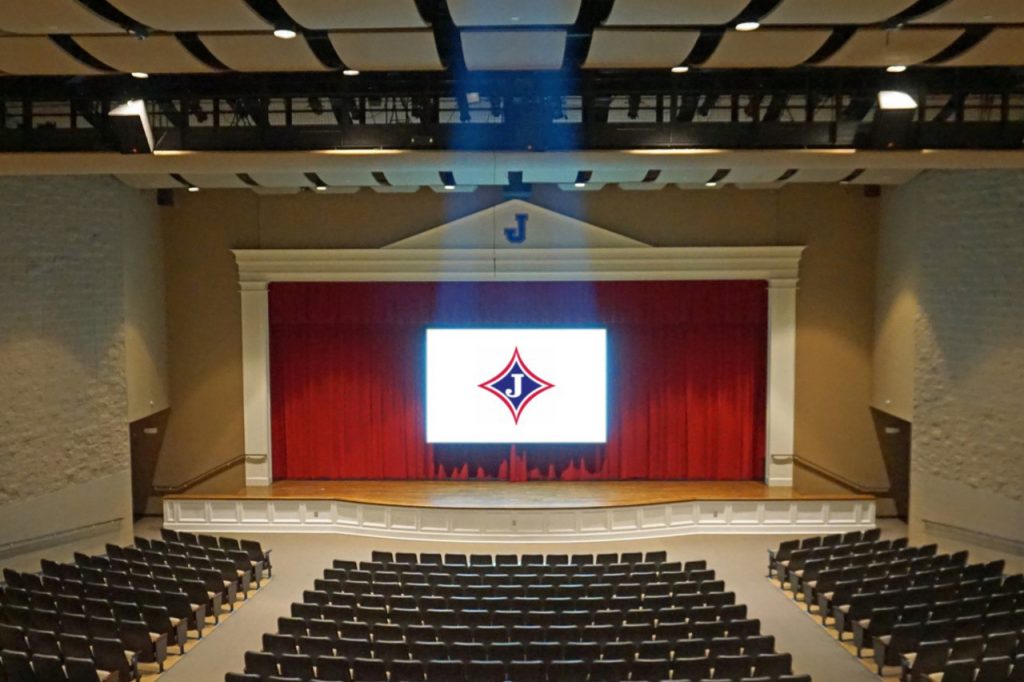 Jefferson, GA – April 2019…Jefferson City High School offers learning opportunities and academic instruction to more than 700 students in grades 9 through 12. In addition to the usual programs including math, science, and English, the school’s academic incentive program offers instruction in physical education, band, chorus, as well as career and technology studies. As part of its endeavors to provide a wide range of technological solutions to help further these programs, the school recently decided to implement projection technology in their auditorium. This resulted in the installation of an EK-800U widescreen projector, outfitted with the AH-B23010 long-power zoom lens—both drawn from the catalog of Rancho Santa Margarita, CA-based Eiki International, Inc.

Nisewonger AV, Inc. of Lawrenceville, GA, a design / build AV integration firm and Eiki dealer for over 20 years that focuses on AV systems including video walls, AV over IP solutions, interactive technology solutions, and digital signage among its many offerings, was contracted to design and deploy the new projection system at Jefferson City High School. Joshua Albertson, the company’s Marketing and Sales Representative, oversees the company’s sales efforts from initial consultation through installation. He discussed the project and the reasons for deploying the Eiki equipment.

“Jefferson City High School’s auditorium seats 640 people,” Albertson reports. “The space is primarily used for concerts, drama performances, community events, and school meetings. It has also hosted regional theater and band competitions, the premiere of a documentary, as well as concerts and events for community performance groups. The school wanted a solution that offered the ability to provide everything from crisp, clean text to high quality images and other visuals that could be used to enhance their various programs. After careful evaluation, we determined that the Eiki EK-800U projector with the AH-B23010 zoom lens made a compelling solution for their requirements, which include presentations and video, as well as scenic projection for events such as musicals.”

For this installation, the projector is positioned approximately 100 feet away from the screen at the rear of the auditorium in a sound booth. The Nisewonger AV installation team outfitted the EK-800U projector with the Eiki AH-B23010 long-power zoom lens, which Albertson reports, “paired perfectly with the newly installed Draper, Inc. 222-inch diagonal 16:10 aspect ratio electric screen that was deployed at the stage area.”

When queried about those attributes that made the combination of the EK-800U widescreen projector and the AH-B23010 long-power zoom lens so well-suited for this project, Albertson offered the following thoughts. “I went with this projector because of its exceptional brightness,” he explained. “At 12,000 lumens and WUXGA (1920 x 1200) resolution, you can leave the house lights fully on or turn everything off and have a terrific on-screen image either way—and the customer loves this feature!”

With many AV installation projects, questions inevitably arise, so quality customer and technical support services are crucial in order to keep a project on track. Here too, Albertson was very complimentary of Eiki International. “For the most part, we haven’t had that much experience with Eiki’s technical support,” he said. “In my book, that means they have a great product. On those rare occasions when we have had issues, the company has been very proactive. Bottom line… the support has been really good and responsive.”

The Jefferson City High School installation was completed in early January 2019 and since that time, Albertson reports his client is very happy. “Since installation, our customer has been very pleased with the Eiki system. The projector is incredibly bright, which was necessary for such a large screen and large auditorium space. Two of their main concerns were brightness level and clarity—both of which have been achieved with the Eiki EK-800U. This equipment proved to be the ideal solution for the school’s applications, and Eiki’s performance makes all of us look good.”