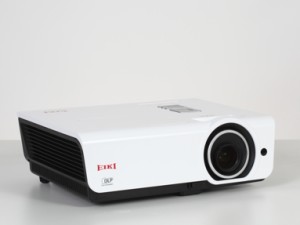 As the company’s replacement for the venerable EIP-U4700, the new EK-402U provides Native WUXGA resolution and is compatible with inputs up-to UXGA and WUXGA. This capability provides considerable flexibility for accommodating a wide variety of input sources. Further, as part of its support for both analog and digital video input in all color standards up-to 1080p, the EK-402U provides two HDMI® inputs and DisplayPort Digital connectivity with HDCP compliance.

Of particular note, the new Eiki EK-402U is compatible with Crestron RoomView™ and AMX Device Discovery Technology. With support for these two prominent AV protocols, this versatile projector can be controlled directly from the same meeting room control panels or tablets used to adjust lighting, raise or lower screens, and adjust related aspects of the meeting room environment—making it a perfect fit for the contemporary meeting space.

Steve Rubery, Eiki’s National Sales Manager, commented on the company’s new EK-402U 4,700 ANSI Lumens / WUXGA / DLP projector, “As the successor to the very popular EIP-U4700, the EK-402U offers 5 times the contrast ratio and a much wider throw to width ratio that allows for easier placement for both new and upgraded installations. This series has also has proven very popular as a rental projector due to its brightness and multiple input capabilities.”