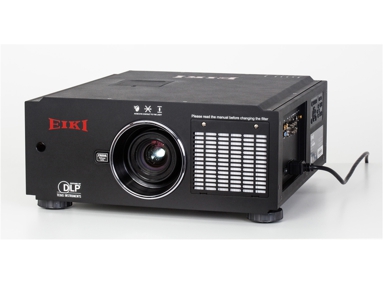 Eiki International, Inc. a world leader for over 40 years in projection technology, announces the new EIP-UHS100 single chip DLP projector with 8,000 ANSI Lumen brightness and a 2400:1 contrast ratio. Featuring a native WUXGA (1920 x 1200) resolution that is compatible with inputs up to UXGA and WUXGA, the new EIP-UHS100 supports analog and digital video inputs, including 3G HD-SDI and HDMI, in all color standards up to 1080p. The result is a projector that delivers consistent color and first-class readability in a cost effective package that redefines value for professional large venue installations.

Noteworthy among its many features, the new EIP-UHS100 projector has built-in Edge Blending for combining multiple projected images into a single seamless image and Image Warping, which facilitates digital image manipulation for either corrective or creative purposes. Additionally, the projector incorporates a lens memory feature with as many as ten saved settings. This makes the EIP-UHS100 ideal for venues where, for example, there are movable walls—enabling the focal settings to be memorized in advance for each projected distance.

Steve Rubery, Eiki’s National Sales Manager, commented on the company’s new DLP projector offering. “The EIP-UHS100 is a feature rich projector that adapts well to the ever growing demands of the Pro A/V community. With built-in connectivity and installation options, it can adapt to a wide variety of venues. Of particular note is a .76-.93 t/w optional lens with shift capabilities that enable the projector to be used where space is at a premium!”

The EIKI EIP-UHS100 single chip DLP projector carries an MSRP of $16,995. The product is available now.