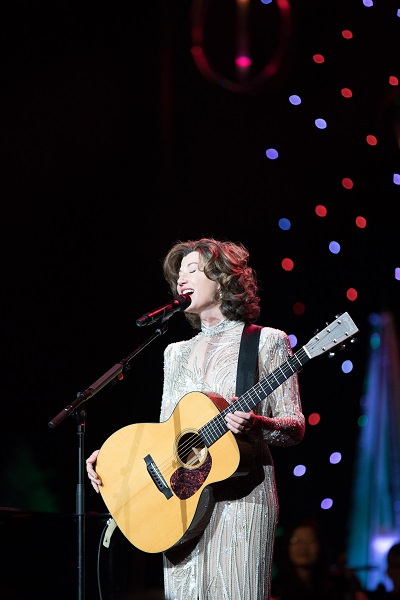 As one of the music industry’s most highly respected studio and live mixing engineers, Russ Long recently embarked on the Christmas with Amy Grant and Michael W. Smith tour, which also features Jordan Smith, Season 9 winner of The Voice. Long needed a microphone that would capture Grant’s soft vocals without any handling noise. The solution was DPA Microphones’ d:facto™ Vocal Microphone.

Long has been using DPA mics for over a decade, but only recently tried out the d:facto vocal mic. “This past spring was my first time using the d:facto vocal mic,” says Long. “Amy’s voice is amazing and it sounds great through pretty much any mic I’ve heard her sing into. The challenge is, she sings extremely soft, so off-axis rejection is a big consideration, as is handling noise. Since she’s singing soft, the mic preamp has to be cranked up, so a mic that is only slightly susceptible to handling noise with another vocalist becomes a significant concern with Amy. Ryan Lewis, who was my system tech last year, has golden ears and insisted I give the d:facto a try. Once I did, there was no going back. It has virtually no handling noise at all and it sounds simply stunning.”

Long bought his first pair of DPA microphones (d:screet™ 4061 Omnidirectional Microphones) back in 2005. Since buying the d:screet 4061s, Long has used them regularly in both the studio and live situations. “I think the d:screet 4061 is one of the most versatile and musical microphones ever created,” he adds.

He also uses d:vote™ 4099 Instrument Microphones, primarily when recording live concerts for TV and video projects. “The d:vote’s sound amazing and since they attach to the guitar, the sound is consistent, even if the musician moves around. I’ve found that in addition to acoustic guitars, they work well on practically any sound source, from drums and percussion to piano, violins, violas, cellos and upright basses.”

On the current Christmas tour, which features a 56-piece orchestra, Long is using 14 d:vote 4099’s and 12 d:screet 4061’s scattered throughout the orchestra, primarily on the strings. When they use a grand piano, Long mics it with a pair of d:screet 4061’s using the magnetic piano mounts.

“We travel with a conductor, but we use local orchestras, so we are seeing entirely different musicians on stage every day,” says Long. “Between the band and the orchestra there are over 100 inputs, so there is a lot of potential for problems. Between the DPA mics and the SSL mic preamps, I’m doing very little EQing on the majority of my orchestra inputs. The thing I notice the most about DPA mics in regard to EQing is that my adjustments tend to be rather subtle. The mics are natural, smooth and extremely musical, and in most instances they require little or no equalization. I can’t imagine a time, whether in the studio or in a live scenario, when DPA mics aren’t a regular part of my setup. I am a big fan of DPA.”