Central Christian Church supports four satellite campuses located around the Metro-Phoenix area from our central facility in Mesa. Like most churches, we rely heavily on volunteers, so when thinking about implementing new technology or simplifying work­ows, we have to consider the end-user, typically a person who, more than likely, has no prior TV production experience. So it’s an absolute necessity that any solution we choose be fool-proof and easy-to operate.

Every week we simultaneously record our sermons onto multiple Blackmagic HyperDecks, one for each campus plus one for redundancy, and then distribute them to the satellite campuses via portable hard drive. We chose this method because it’s the most cost effective and efficient way to deliver high-quality video; however, it takes lots of hands-on individual set-up and device control to pull it off. The decks don’t retain audio/ video input settings and each has its own record button. It’s impossible for a lone individual to manually put five or six decks into “record.”

We went to NAB in 2015 specifically looking for a device capable of triggering all the record decks simultaneously and control equipment over our IP network. There were lots of different options to explore, but most required developing a web browser interface and writing software. We didn’t want to task a volunteer operator with logging onto a computer program, and navigating around a menu driven GUI.

By a happy coincidence, we were walking by the DNF Controls booth and noticed they were controlling a HyperDeck with one of their devices. Dan Fogel, DNF’s CTO, and Fred Scott, VP Sales & Business Development, walked us through their IP Control Buddy and demonstrated its ability to send commands over a network. It was really impressive and we knew we had found our solution. It literally couldn’t be any easier. A volunteer need only press one button at the right time and the job’s done!

We received a demo unit to evaluate the product’s quality and assess its sustainability. IP Control Buddy was quickly setup, placed into operation and has become our new normal. Instead of dealing with software developers and having to hire people with skills beyond our own areas of expertise, we went with something very simple and easy for our staff to configure, install and integrate into our workflow.

The DNF IP Control Buddy version we’ve adopted has four buttons, although we only use three of them. The first sends a command that configures all the devices for the task at hand. Certain devices take video inputs and others, perhaps, take a different audio input, and they don’t natively remember what they’re supposed to do. We’re now able to automatically configure every one of the devices through IP Control Buddy’s Button #1. Button # 2 starts them all recording and Button # 3 stops everything. All of our control rooms are sequenced, everything turns-on by itself and in the correct order, red-up and ready to go. IP Control Buddy definitely met our need for simplicity.

Although triggering all the recording activity was our first application, we’ve been able to push Control Buddy’s capabilities even further and have installed one in each of our other campuses for a total of five.

Our operators no longer have to go to a rack unit somewhere in the facility to play or stop a piece of equipment; we’ve been able to put the controls right in front of them. We’ve taken the DNF’s IP control technology beyond recorders and playback devices, turning projectors on and o‑ in all our venues as well. The volunteers think it’s awesome and can’t understand why we didn’t do it sooner. 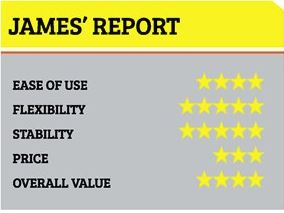 IP Control Buddy came with a user manual that explained how to configure the device. I don’t consider myself a programmer or so­ftware developer. I don’t have a lot of experience in those areas, but I could understand and figure it out. Dan Fogel explained how to issue and structure some of the more obscure commands, so I was able to configure it rather quickly.

For the record, I am very pleased with how DNF delivers and their staff’s willingness to work with us and create mounting solutions that t our particular needs. I’ve also been very impressed with DNF’s support team. I can email or phone them whenever I have a question and always receive a quick response. Victoria, their oce manager, promptly processes all inquiries to the sales and tech support team, and both Dan and Fred have been very attentive. DNF definitely makes me want to come back for more.