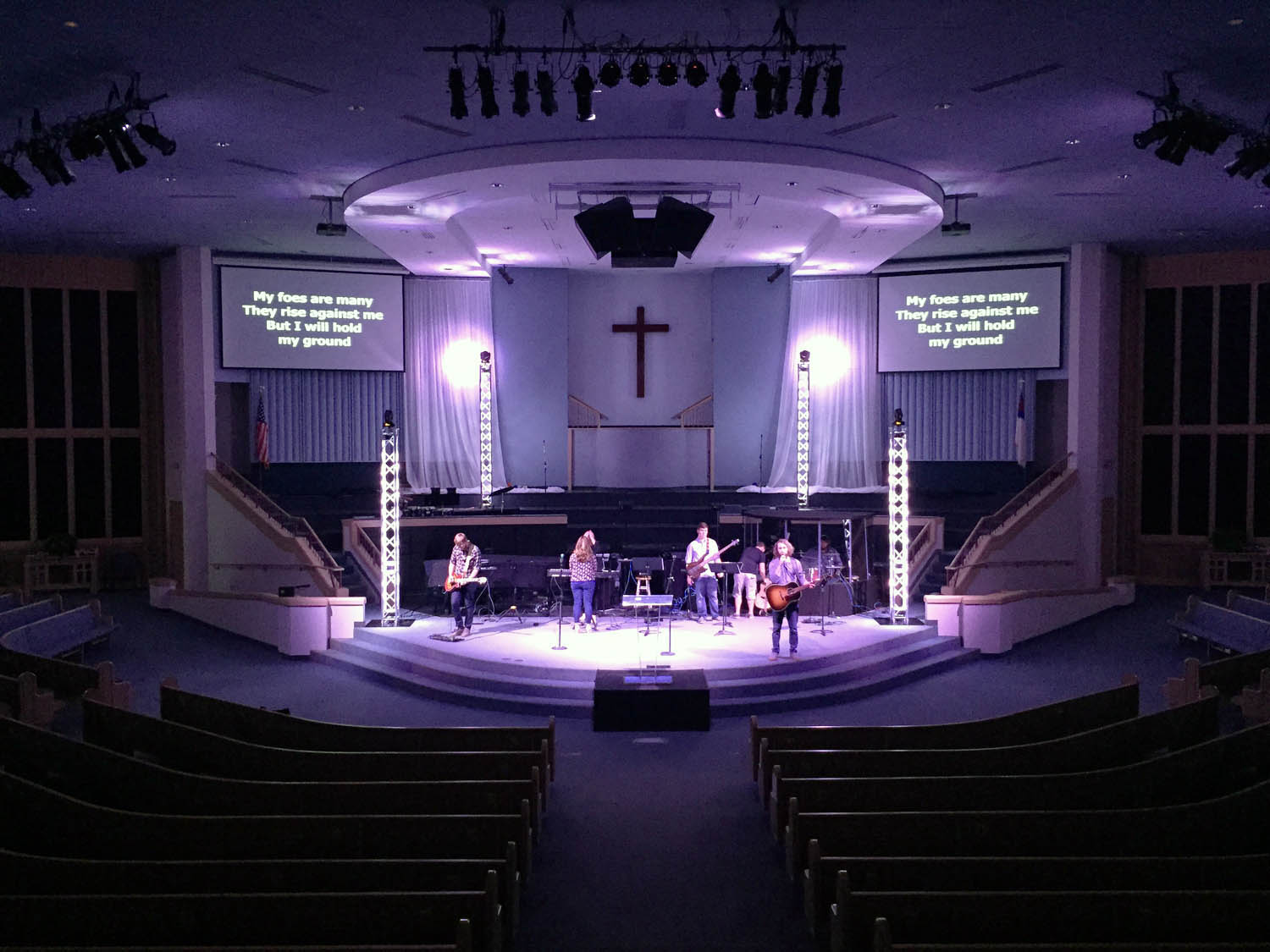 By offering both a “classic” service and a “connect” service every Sunday, First Baptist Church in Claremore, Oklahoma has been hugely successful in building its congregation. Both services are big productions. The “classic” service requires sound reinforcement for primarily traditional orchestral instruments, whereas the “connect” service delivers a modern-rock vibe with high-energy music, video, and lighting. As First Baptist pushed its offerings into exciting new territory, they inevitably outgrew their decade-old sound reinforcement system, which they pushed to the point of chronic equipment failure. With a media-driven worship service, FBCC needed a reliable upgrade to deliver the gospel within its 1,500-plus seat sanctuary. The church called on McClelland Sound, Kansas, Oklahoma, and western Missouri’s family-owned and operated audio/video/lighting experts since 1928, to design and install a system that would support – and even inspire – all of their efforts.

“The old system simply couldn’t keep up with the current demands of the congregation,” said Rob Barton with McClelland Sound. “The coverage was inconsistent, the overall headroom was inadequate, and the low-end support was almost nonexistent. Despite the low house volume, First Baptist also continuously wrestled with feedback problems. In contrast with what they had, the church wanted a full concert experience as they, indeed, hoped to attract major Christian rock artists and needed a system that would be rider-friendly. Finally, the church also needed a system that its largely volunteer-based staff could understand and expertly operate… but that still had abundant flexibility to handle both of its distinctly different services – with only a short break to switch between them.”

First Baptist wanted to choose from among several proposals, and “like a lot of people, they were stuck on the word ‘line-array,’” according to Barton. “We modeled everything, submitted the results to the church, and gave two line array options and a Danley Synergy Horn solution. The Danley system provided the most headroom, consistent coverage, fullest frequency response, and had a smaller physical footprint. Moreover, the Danley system was the most affordable option, in large part because each Danley box requires just one amp channel, unlike the line array, which required tri-amplification, a re-work of the building’s electrical service, and a lot more boxes.”

Before committing, the church received two Danley demos, one planned and one unexpected. Don Ludwig of Ludwig Marketing (the Midwest distributor of Danley Sound Labs equipment) traveled to the church for demonstration. “Don is the most straight-shooting guy in the industry,” said Barton. “He pulled up with his trailer and proceeded to set up a system with no filters and no DSP – just power and a raw and honest Danley experience. He said, ‘Okay, this is completely unprocessed and not tuned to your room. It can only get better from here.’ Then we played some prerecorded material and invited those who attended the demo to play some of their own, spoke into a basic vocal mic, and demonstrated the pattern control by showing the off-axis feedback resistance. The speakers knocked the room out of the park with every test.” Weeks later, gospel artist Guy Penrod performed at First Baptist Church Claremore and summarily dismissed the (still woeful old) sound system in favor of the Danley boxes he carried in his trailer. “Guy and the sound of his Danleys blew everyone in the church away,” Barton said. “After that, there was no question that the church wanted a permanent Danley system.”

The system Barton designed uses four Danley SH-60 full-range boxes in a tight-pack cluster above the front of the stage with a Danley TH-412 subwoofer behind it. The room is a broad fan shape, and the SH-60 cluster provides that broad coverage. Like a single pebble dropped in still water, it does so without introducing interference. Barton set the system with a low sub-to-mains cutoff frequency, which gives the complete cluster a cardioid characteristic that further serves to keep volume to a minimum on-stage. Just two 4-channel Powersoft X4 amplifiers drive both the mains and the subwoofer, providing the modest DSP required to condition the system (including active DampeningControl™ for the subwoofer that Barton swears by). A new Soundcraft Vi1 console gives the church the ability to recall for quick changeovers between service types. In addition to the 32×32 I/O of the Vi1, a (completely used!) 64-input/24-output Vi Stagebox allows for flexible use of the scores of stage inputs and ability to combine the two worship services on holidays. Stage mixes are all handled through AKG wireless IEMs and DBX personal monitor mixers. To maintain clean signal-to-noise ratios throughout the system, all audio between components is 100% digital and transported via optical MADI, Dante, and BLU-Link to be processed and routed by the BSS BLU-806 DSP (which also serves multi-track recording via Dante). A Crown DCI8|600N powers stage monitor circuits, overflow/cry rooms, and distributed audio in the building. Pakedge network switches allow for remote monitoring of the system. “The city is prone to rolling blackouts and brownouts, so we put the entire system on SurgeX uninterruptable power supplies and power sequencers. In the first service with the new system, the building lost power for close to five minutes, but they were able to continue their service without hiatus.”

“Not only is First Baptist Church’s new sound system powerful, clear, and deep, the coverage is uniform throughout the sanctuary and the gain-before-feedback is practically infinite,” said Barton. “Another testament comes in the odd form of a train whistle: you could literally throw a baseball from the church to the train line that runs through town. With the old system, the train whistle would frequently interrupt a sermon or a song, but with the appropriate SPL of the Danley system, the train whistle is effectively masked!