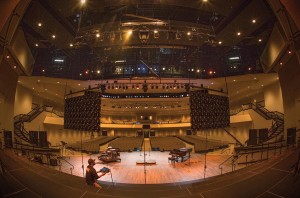 Bakersfield’s Valley Baptist Church provides three worship services every Sunday in its 1,800-seat Worship Center—two services with a choir and orchestra to appeal to a diverse age group, and a third with a praise band playing guitars and drums. As its congregation grew and more young adults with children crowded the center for the contemporary service, the church’s leaders decided it was time for an update of the hall’s technology.

A decade ago, the church had installed video projection screens, so the faces of the pastor and other celebrants would be very visible to everyone seated in the hall. The church also projects song and hymn lyrics on the screens, a feature that significantly increases the congregants’ participation in the service.

A stage filled with musicians and a choir feels grandly spiritual, an effect that appeals to many people attending—but a deep, mostly empty stage can dwarf a much smaller band. To find a new configuration that would work for both kinds of services, the church approached the theatre consultants at Idibri Design, the company that had worked with Valley Baptist on two previous steps in this technological renovation.

“We wanted a way to update the stage look between the two services without losing the ability to use screens upstage,” said Jason March, director of engineering at Valley Baptist. “We wanted a backdrop that would come down and separate the orchestra and choir from the praise band, and we wanted our screens to come forward in front of all the backdrops. We didn’t want to lose all the graphics and images for the service with the praise band.”

Idibri began the renovation by replacing the video projection screens with two 18’ x 10’ LED display walls, a technology update that increased the movability of the church’s video system. The challenge, however, came with the need to reduce the stage size to make the space more intimate for the contemporary service. The church needed a system that would move the screens downstage 28 feet, and then lower them to eight feet above the stage.

“The people at Clancy and I came up with a reasonable solution, based on the design concept from the consultants at Idibri,” said Chris Berendsen, installation manager at Pacific West Sound. “Clancy had done LED gantry systems that moved up and down or in and out, but this one had to do both. It was truly unique.”

Movement on several different axes was only part of the solution, said Patrick Finn, product manager with J. R. Clancy. “They needed the screens to play at both an upstage and a downstage location,” he explained. “We designed a way for them to travel upstage and store flush with the back wall. It required a custom hoist and gantry system, using components of our PowerLine® line shaft hoist—but configured in a custom way.”

Clancy’s SceneControl® 5200 control console serves as the controller for the LED gantry system. The SceneControl® console provides programming for up to 24 axes, with the ability to start and stop an axis multiple times within a cue. The graphic touch-screen display shows the operator the position of each batten and all of the targets, and an emergency stop system and hold-to-run function make the SceneControl® a good choice for facilities that may use volunteers to run the rigging.

With the system in place, Valley Baptist can transform the entire stage in minutes. “If you can imagine, we actually strike most of the orchestra pit, and we do a whole audio changeover between services—in about 15 minutes,” said March. “Having the screens move forward has improved the dynamic of our services, without a lot of extra effort. The LED screens and movable gantries have allowed us to put them wherever we want, without worrying about how the projections will appear.”

Dale Hourlland, SceneControl 5000 technical manager for J. R. Clancy, came to Bakersfield to teach March to use the SceneControl® 5200 console. “I worked directly with him in building the control for the SceneControl®,” said March. “It’s fantastic. I can do all kinds of cool things.”

In addition to the LED gantry, J. R. Clancy provided three Varion® hoists and a PowerLift® hoist to add lighting positions above the stage. “They record and simulcast a lot of their sermons and put them online, and they had to have the lighting to complement that,” said Finn. “The Varion® hoists are above the stage, and the PowerLift® is above the house. We also provided the pantograph cable management system for those.”

With all of these elements, installation of such a system could have been complicated—but Pacific West actually finished the job in just four week, two full weeks ahead of schedule.

“The relationship with Clancy was outstanding,” said Berendsen. “I have more cell phone numbers for their employees than with any other supplier. They know the product and the engineering one end to the other. They are always accessible and easy to reach. If we had any questions, there was an answer almost immediately.”

The proof of success is always in the client’s experience with the new system, and March reports that it has served exactly the purpose the church intended. “We get two drastically different stage looks for the two kinds of services,” he said. “Our goal is to set an atmosphere with this remodel that helps us share the love of Jesus Christ with whoever walks into our church. We are definitely doing that.”