For Greig Hess, music is an 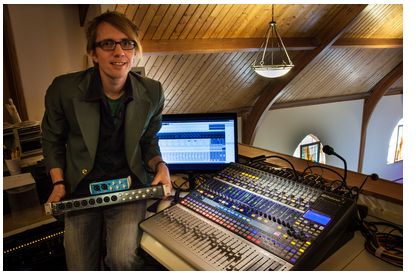 indispensible part of the worship experience. As Worship Pastor at Boulder’s Crestview Church, Hess has long been a strong advocate in creating a contemporary service that inspires through music. And as he explains, PreSonus gear has made a tremendous impact on his work.

“I originally got an AudioBox 1818VSL for our small project studio about a year now,” he says. “I began using it on some live events as well, and I was really impressed with it. So we recently got a StudioLive 24.4.2 console for the sanctuary, and it’s dramatically changed the way we create and record our music.”

Hess says the StudioLive has enabled them to radically streamline their live service production. “The processing power in the StudioLive is equal to several times the outboard gear we had before – we can have a compressor and effects on every channel if we need to. Plus we were able to remove a whole rack of gear from Front of House. And the ability to save full snapshots of everything has done amazing things for our workflow.”

As has the ability to record the entire mix, he observes. “We use Capture to record a multitrack of our live service. With a volunteer staff, it’s great because when you are training a new sound guy you can use it to show them how to run the console, how to add effects, what different things sound like. And you’re doing it in an empty room, without the pressure of a live service.”

In fact, he adds, it’s a useful thing even for a more experienced mixer. “I’m usually on stage playing, and working with a Capture session gives me a chance to get familiar with the board, so I know what to ask for when I need something. It’s also great for rehearsals – we use it to control the mix from the stage, which enables us to schedule rehearsals without having to have a sound guy present.”

Not surprisingly, those Capture sessions have seeded other creative projects as well. “We load the files into Studio One and do some additional production, add instruments and do some sweetening to the tracks,” he says. “You can do some amazing things in Studio One.”

The sanctuary is outfitted with Renkus-Heinz TRX81 and TRX62H two way loudspeakers, powered by Crest and Crown amplification. A Hear Back personal monitoring system drives the musicians’ in-ear systems. And Hess reports he’s also picked up an AudioBox USB to use when playing tracks and loops from his laptop on stage.

Meanwhile, he says, the AudioBox 1818VSL has continued to be a workhorse on its own. “We’ve been using the AudioBox 1818 VSL in our Fellowship hall. It’s enabled us to add a 16-input interface in there, with no fuss and no setup woes. Sometimes we do video projects, and the Audiobox 1818VSL makes a great portable setup we can take anywhere. And I’m already thinking about how we can use it when we do retreats. I can basically set it all up for them here, configure it all the way they will be using it, and they can take it with them and not have to worry about needing a sound guy.”

Hess concludes, “for a smaller church like ours, PreSonus gear has really given us an edge. It’s affordable, it’s easy to use, and it gives us access to the kind of technology that only the really big churches used to be able to afford.”