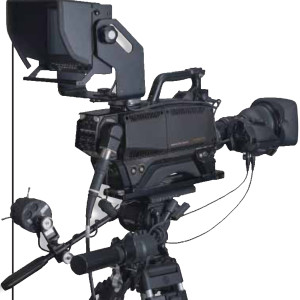 Church on the Move, located in Tulsa, OK, was founded by Senior Pastor Willie George in 1987. The church was started out of Willie George Ministries, which was known, among other things, for it’s kids, youth, and family-oriented broadcasts such as “The Gospel Bill Show” and “Fire By Night”. With this type of television broadcast history, it’s no surprise that a high production value is inherent in our services and culture. Video has always been a high priority for Church on the Move, making the most out of old broadcast cameras for many years. When the broadcast cameras had ﬁnally given us their best (sometime in 2005), we continued doing services with a rental package of Hitachi SD-Z4000 cameras. When we decided to ﬁnally make the switch to HD in early 2014, we made the decision to purchase the entirely new package. We had remodeled our sanctuary in late 2009, and at the time decided to stick with SD and put the money designated for an HD camera upgrade into LED video walls. Although as time went on, the increasing presence of our streaming and download audience encouraged us to examine the quality of our video product. It was obvious we needed to make the move to high-def cameras.

Based on my experiences with Hitachi over the years, I reached out directly to Bob Johnston with Hitachi. He immediately understood the end result we were looking for, and sought to ﬁnd a creative way to help us. It was remarkable that they were willing to ﬂ y here at their expense, as well as ship in an HD-Z5000 camera chain, PLUS spend a day with our team going through the system. Additionally, they left the camera for the weekend so we could run it against our older SD cameras. Having a full weekend of rehearsals and services to compare the two systems deﬁnitely sealed the deal. When we looked back at the footage – both recorded and on our video walls – we knew we had to make a change. The connection the HD ﬁlming made with the congregation was undeniable – the clarity, colors, and actual intensity of the image were vast improvements, and quite compelling both in the room and on the record/broadcast side. Switching to HD went further than just upgrading some cameras; the decision was made based on the environment HD helped to create. Our congregants felt closer to the worship team, presenters, and pastors on stage, and it changed the entire dynamic of our service.

When it came to the speciﬁc camera package, HD prices had come down so much since 2009 that it made more sense in the long-run to purchase instead of rent. Even though we were looking at a signiﬁcant package of seven full camera chains (cameras, CCU’s, and engineering control), further cost analysis conﬁrmed that purchasing this technology versus continuing a rental solution was the more prudent decision. In the room, we currently run an eleven-camera shoot including a PTZ and several GoPro’s, but the crux of the system is found within the seven Hitachi broadcast cameras. One signiﬁcant item of interest that had the potential to save us a considerable amount of money was being able to re-use our two Fujinon 55x lenses. Hitachi understood this completely, and went above and beyond to help make these lenses work with the cameras. This helped us immensely, as lenses can be the most signiﬁcant expense in a camera chain.

An additional decision was to have these new cameras operate via ﬁber optic technology versus our triax-based system. Hitachi does offer the HD-Z5000 camera that works with triax, but when Bob and his team were here they strongly recommended we make the upgrade to ﬁber optic. Even though it cost us more money and increased the complexity of the upgrade, it was very wise counsel. Hitachi understood that, while we are a ministry, I was interested in “future-proof” options as well, hence the wise suggestion on their part. I brought in one of our trusted integrators, Elevate-AV, to develop a plan we could follow to install Whirlwind ﬁber optics throughout our various facilities. We ended up leaving the majority of the triax cabling in place as well. This gives us the capability to add both triax or ﬁber optic cameras as needed if we choose to scale up for larger events.

Because the majority of our volunteer camera operators were already familiar with Hitachi, the similarities in the design of the new HD systems left us with very little learning curve. This says a lot regarding the ease-ofuse of this product line – they’re designed to work and, overall, are a simple device to operate. Most of our 150+ production 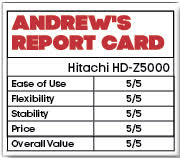 volunteers are not professionals, but they are able to experience fairly ﬂ awless execution with this equipment day in and day out. That’s the big win for us – experiencing an increased connection with our audience with operators that walk away feeling good about what they were able to accomplish. The Hitachi HD-Z5000 cameras have made our switch to HD seamless, and we are already experiencing the beneﬁ ts in our worship.