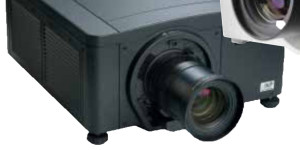 When Knox Presbyterian Church, Waterloo, ON, decided to build a new facility to replace our aging building, we chose to have large open spaces with ﬂ oor-to-ceiling windows that let in lots of light. While our people love it, projectors don’t.

We realized that in order to get a decent image on our new screens, we needed to invest in high-end projectors. On the advice of our video consultants, Dynamix Professional Video Systems, we acquired three Christie projectors.

Our sanctuary is a 60’ x 90’ room with windows making up about half the wall space. For this space we decided on a Christie Roadster S+12K 12000-lumen 3-chip DLP projector. With its exceptional brightness, it’s able to light up a 21’ specially-painted wall at a distance of 75’. Even on a sunny Sunday morning, this projector gives us a clear image.

The main hall has fewer windows and a shorter throw distance, so we chose the less expensive Christie DS+10K-M 11,550 center lumens 3-chip DLP projector. Although not quite as powerful as the Roadster, it does a good job producing a 12’ image at a distance of 45’.

The third projector, a Christie LX505 (3-LCD), was originally meant to be installed in our largest meeting room but it wasn’t long before we realized that it would be far more beneﬁ cial in the sanctuary. We originally thought that the sanctuary screen would only be for the congregation but as we added more content (pictures, video, etc.) it became obvious that we needed a screen that people on the chancel could see without looking over their shoulders. To that end, we installed a large screen at the back of the sanctuary and repurposed the LX505 for this task to allow everyone to fully participate in the services.

The Roadster and the DS boast native resolutions of 1400 x 1050 (SXGA+). This is really more resolution than we need for regular services but our facility is being regularly rented by other groups so it’s nice to have the extra capacity.

The LX505’s native resolution is 1024 x 768 (XGA). Although I wouldn’t want to go any lower, this resolution is quite reasonable for the material we are showing.

Even though these projectors were chosen when HD projectors were much less accessible, all three projectors can handle a 1080p HD input signal. It’s also worth mentioning that Christie offers a factory-service that will upgrade the Roadster and the DS to 3D capability. 3D isn’t something we’re likely to need anytime soon but this ongoing support demonstrates that Christie is committed to future-prooﬁ ng our investment.

All three projectors feature a variety of standard and optional inputs but since they are permanently mounted we just use the RGBHV connections and connect them to an Extron Crosspoint 88 A/V matrix switcher. This lets us to route all kinds of signals (VGA, HDMI, etc.) to any or all of the projectors, providing a simple, user-friendly solution for our all-volunteer team.

Specs are great on paper but the only thing that’s really important to our audience is how the content looks. The Roadster is the clear winner when it comes to picture quality, producing beautiful crisp images with accurate colors (the whites are really white!) and good contrast. Display a test pattern and you can easily distinguish each level of grey. That said, the images do get a bit dull when the screen is in full daylight. There’s only so much you can do when your “black” is a daylight-illuminated white wall.

A close second is the DS – you would have a hard time telling the difference between the two if you weren’t using a test pattern. As I mentioned, the LX505 wasn’t originally meant to go in the sanctuary but it produces a very respectable image. With a throw distance of under 25’ and the darker rear-sanctuary, this screen tends to be brighter than the main screen. For the purpose of allowing the people on the chancel to see what’s going on, it does a great job.

All three projectors support a wired connection to the remotes. When I push a button, I am sure that the projector gets the command. Wires also ensure our remotes don’t walk away! 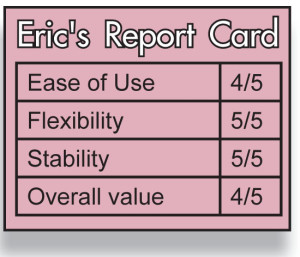 Each projector supports discrete on and off commands, and buttons to power on and off. This is much better than an on-off toggle button that leaves you wondering if you really did turn the projector on until the lamp eventually turns on. AUTO SET is another great feature. If the image shape is wrong, push this button and it usually fixes it for you. The Roaster and LX505 almost never need adjustments. The DS in the main hall is the one that needs to be AUTO SET the most, probably because it’s the one that gets more frequently used with guest computers, all with different video settings.

We are very happy with our projectors, as they are well suited to our needs. If your budget can support it, I highly recommend you have a look at the latest generation of these projectors.

Eric is the Volunteer Tech Coordinator at Knox Presbyterian Church in Waterloo, ON, Canada.