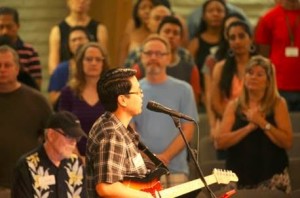 Christian Assembly Church in Los Angeles, Calif., first began as a small prayer group of Italians during the Azusa Street Revival Movement in the early 1900s. Since its establishment, the church has been focused on promoting a welcoming and open place for everyone in the community and has grown considerably over the years, with close to 3,000 worshippers attending services each week. The current church was built in 1976, and by 2010, was due for a major renovation project, including a completely new suite of wireless systems and microphones. For the audio overhaul, Dirk Bolle, IT/Tech support specialist, turned to the Shure UHF-R® Wireless System and KSM8 Dualdyne™ Vocal Microphones to ensure consistent and flawless performances from the worship leader and vocalists.

When approaching the renovation, Bolle was determined to find a reasonably priced and reliable wireless system that would eliminate any unwanted, disruptive noises, which had been an issue with the older equipment. Having had positive experiences with Shure wireless systems in the past, Bolle elected to install UHF-R. Designed to provide sound professionals with all the features and flexibility they’ll need, UHF-R is capable of mastering high pressure and extreme conditions for large-scale installation environments, all while delivering uncompromised sound.

“The Shure UHF-R system was an obvious choice for this installation,” said Bolle. “Our worship leader, Tommy Walker, has been a long-time user of Shure wireless systems. Previously, we had been using another brand’s wireless system and found it difficult to understand and operate, all while consistently having issues with background noises. Now with Shure, from a sound engineer’s perspective, the system has been a blessing.”

In the past, Christian Assembly had been using a variety of microphones for the vocalists, including Shure’s Beta 58s and the legendary SM58. Following the 2016 Winter NAMM trade show, Bolle was introduced to the KSM8 Dualdyne Cardioid Dynamic Vocal Microphone, and eventually bought one for the church from CCI Solutions. Impressed by sound quality, lack of proximity effect, off-axis rejection, and output accuracy, a blind, side-by-side test was run on the church’s worship leaders—all of whom unanimously selected the KSM8 over a competitor’s microphone. As a result, the church purchased an additional six KSM8s.

“An important aspect of our services is the musical performances from the vocalists. After putting it to the test, we were extremely impressed with the KSM8’s ability to deliver a high-quality performance, regardless of who was using it, or how,” stated Bolle. “Following the initial test, all of our vocalists agreed that the KSM8 provided a higher quality sound output than what we were accustomed to, and as a result, we wanted to ensure that all of the vocalists had their own. We will likely purchase more to achieve that goal.”

“As Christian Assembly continues to grow and look for new ways to improve our audio needs, we’ll continue to look to Shure as a trusted partner,” added Bolle.