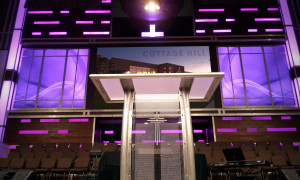 Surveying their new 3,000-seat sanctuary in the late 1980s, the leaders of Cottage Hill Baptist could not have helped but marvel at how far their church had come since 1944 when it started with 28 worshippers under a tent in Mobile, AL.  However, change has always been the order of the day at this dynamic house of worship; so not long ago a new generation of leaders decided that the time had come to update their now over 30-year old sanctuary.

Since constructing a new building wasn’t financially feasible, Cottage Hill turned to Paragon 360 of Springfield, Missouri to create a new more engaging look at the church through a renovation project. Paragon accomplished this feat in beautiful and cost efficient fashion with a redesign that used the COLORdash Par Quad 7 RGBA LED par style fixtures from CHAUVET Professional along with COLORband Pix linear pixel mapping fixtures.

“Cottage Hill is a very vibrant church that experienced impressive growth,” said Donnie Brawner CEO of Paragon 360. “However, the design of its sanctuary had become dated and as a result less likely to connect to today’s worshipper. Our job was to redesign the sanctuary to create a more contemporary and friendly impression.”

The Paragon team began their redesign effort by focusing on Cottage Hill’s stage, aiming to give it a new look that connected more directly to the audience. There were several design features in the stage area that had to be changed if worshippers were going to be offered a more engaging experience. For example, the semi-circular design of the concrete choir loft prevented choir members from facing the congregation.  The stage also had acoustical and aesthetic issues, such as the large black curtain that was placed over an area in front of the choir loft where a pipe organ had once stood.

Paragon’s design plan included some very basic cost-effective solutions that minimized demolition and reconstruction. “The existing, problematic choir loft was going to be cost prohibitive to fix,” said Brawner. “We came up with a plan to block, hide and essentially wall off the old choir loft areas and then work in front of that space by creating a new background wall. With some minor modifications to the stage design, we were able to accommodate the necessary choir and orchestra members without having to utilize any of the old choir loft space.”

By eliminating the need to demolish the old concrete choir loft, Paragon’s redesign saved Cottage Hill hundreds of thousands of dollars. “We planned this project very carefully to minimize costs and any disruption to the church,” said Brawner. “Cottage Hill was able to continue holding services in its sanctuary throughout the renovation.”

Controlling costs was obviously very important, but the real value of the redesign was in the welcoming modern look it gave the churches stage. Paragon achieved this look by custom designing a scenic wood/slat 32-foot wall that spanned 48-feet across the stage. Included in the wall are doors for backstage access, two changeable graphic boxes, a center video screen, a recessed choir entrance and exit, and a cross unit at the top. The wall is framed in metal banding work with four 45-foot columns. Modular staging with matching wood treatments and acrylic glass railings was used to extend the stage at the corners and center in addition to providing a choir riser system for up to 90 choir members.

The new design sparkles invitingly thanks to illumination from the 50 Chauvet fixtures used in the project.  Chauvet products were installed on the new stage’s 1,536 square foot scenic wall and in light boxes flanking the video screen behind the choir. The COLORdash Par Quad 7 fixtures were positioned inside the 45-foot stage columns to turn them into richly colored illuminated posts.

“We were able to use the Par Quad 7 inside the columns because it was skinny enough to fit, yet at the same time it had the punch we needed to make the design work,” said Ron Robertson, the lighting and scenic designer on the project. “Everyone is impressed with the intensity of the Par Quad 7; they make their point on stage even with the bright key lights being on during services.  Also, the fact that these are LED fixtures is extremely important, because you don’t want to be replacing lamps when you’re dealing with 45-foot columns.”

Although he says that budget was “of the utmost importance in this project,” Robertson emphasizes that it’s been the clean contemporary and very engaging look of the new Cottage Hill stage that has made everyone involved with the church happiest. “The Chauvet products are workhorses that deliver great value for the investment to be sure, but their performance is really what stands out,” he said. “These lights are bright and bold; plus their refresh rate is fast enough to make the fixtures video friendly.  These fixtures were instrumental in helping us bring this church’s stage into the 21stcentury.