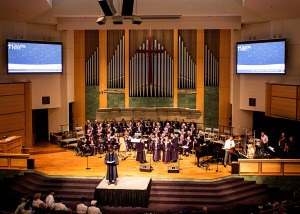 Church personnel were looking to replace a pair of 10,000 lumen projectors whose optics were going bad and initially looked at two 15,000 lumen projectors as replacements. “The church was ready to go with projectors and they seemed to have already had their mind set on it,” states Agility’s Kevin Hill, account manager on the project. “They had a few companies come in with projectors but there were issues with the ambient light that comes in from some windows overhead that can wash out the screens. Although the new projectors looked good they just weren’t bright enough. They didn’t look great and just didn’t blow you away like they should, especially for the cost.”

Kevin then talked to the pastors and the technical director of the church about considering LED video screens instead. “We showed them a demo of an Elation EZ4 LED screen on a project we did at Quil Ceda Creek Casino,” Kevin said, “and that impressed them to the point where they said ‘yeah, this is a technology we need to look at.’”

Kevin and the team at Agility had looked at the Elation EZ6, a 6mm pixel pitch LED screen, at the Infocomm trade show in Las Vegas in June and later at the Elation headquarters in L.A. and liked what they saw both performance and cost wise. “The Nit rating of the EZ6 was so much higher than the brightness we could get with the projectors,” Kevin states. “And the EZ6 will last a lot longer and without having to change lamps frequently. Maintenance is also a lot less. Once the church saw the LED system and the possibilities with it, it really blew them away.”

As the design/build company and system integrator, Agility removed the old 4:3 format screens (approximately 14 ft wide) and projectors and replaced them with two 16:9 format EZ6 screens (13.24 ft wide by 7.5 ft high), one on each side of the stage with each screen made up of 28 EZ6 panels. Agility created mounting brackets off the wall, had electrical pulled in on each side and ran Cat5 to the screens.

The entire install took only two weeks but putting the LED screens themselves together took little time. “All of the EZ Series LED walls go together really quick,” states Kevin, who says that Agility has had experience with the Elation EZ Series from both the installation and production sides of the company. “Once all the rigging is in place we can get a wall up the size of the screens in Chapel Hill Church in about 45 minutes.

“Our biggest challenge was the rigging, hanging it to the wall and making sure that structurally it was correct,” Kevin explains. “We wanted to make it serviceable so the screens stick out from the wall by 18 inches, which is enough to allow a technician to get behind for service and maintenance.” Agility also trained Chapel Hill personnel on the new system with graphics coming from the professional media server program Arkaos, which is capable of controlling graphics and synchronizing HD video with music and light in real time. The church also uses ProPresenter 5 for worship slides.

First used for services on the first Sunday of September, the new LED video screens have provided other advantages over the old projection screens as well including better image quality and the fact the creative team at Chapel Hill no longer has to deal with obstructing a projection path.  “The screens are currently running at about 50% brightness but it feels 100% better than the projection system was,” Kevin comments. “They were thankful that we steered them to the LED wall and the staff are extremely pleased.”

Kevin concludes by commenting on the increasing use of LED screens in house of worship environments. “LED video walls for worship is really a trend that houses of worship are looking into more and more. It’s now at a price point where it makes sense as an alternative to traditional projection systems.”