Does your church have a cassette ministry? 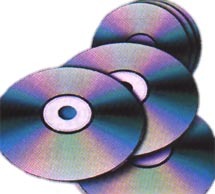 Whether you currently have a cassette ministry or not, I’ll bet you’ve thought about CDs and their place in the ministry. Congregations throughout the world are adding CD ministry to their efforts, and they’re finding it’s not hard to do.

The universality of the CD is not debatable; Three years ago 70% of homes had a CD player; and DVD players, which have been the consumer craze for the last two Christmas’s, are reaching down into VCR pricing. So it’s not going away.

Recently we had a music teacher in one of the public schools inform us that they could no longer make rehearsal cassettes for their high-school aged students, simply because they didn’t have access to any cassette player. While this is not the case for the majority, it is a growing trend. New cars come with CD players; old ones are still ticking with cassette decks. Neither medium will fulfill all your needs. You may need to have both.

The Cassette Vs. The Compact Disc

Here is an argument that I hear quite a bit: CDs are going to put cassettes to death. Is that true?
Perhaps, but tape wholesalers will tell you a different story. The consumption of analog tape is still substantial, and a force to be reckoned with. And a lot of people, particularly aged 25 and up, still have a cassette deck.

CDs are advantageous in that they don’t stretch, break, and freeze as easily, they don’t lose integrity with repeated playback, they have a higher quality sound, and they cue up more quickly.

More importantly, for the purposes of CD ministry, automobiles now come with CD players, and an informal survey of people doing cassette ministry shows that a vast majority of purchasers of religious cassettes and CDs are buying for use in their cars.

I hope so. Now, how do you add a CD ministry on to what you are already doing? That depends on where you are and where you would like to be.

Creating a CD Master can be as complex as mixing down to an ADAT or a Hard Disc Recorder and mastering on a PC using special software created for that purpose, or as simple as taking a line out of your cassette deck into a CD recorder that was made for event recording (‘live feed’ recording).
Microboards, for example, offers a small, inexpensive rack mount unit that has XLR, RCA, and 1/4″ Microphone inputs. Since it has two built in CD recorders, you can record live audio or video feed and it will ‘span’ as each disc becomes full, recording indefinitely. The discs that are produced can immediately be played in a CD or DVD player – no fancy mastering required.

In addition, the unit will act as a simple duplicator, using one recorder to read your master disc, and the other recorder to make an exact copy.
One of the great things about CD-R is that you don’t have to be concerned about overwriting your master – the CD Recorder won’t do it, so you won’t accidentally lose the Christmas Program.

Even if you’re skeptical about a full-out CD Duplication Ministry, the steps above will allow you to make digital, durable recordings for archiving, and make a few copies here and their as required.

But if you find, as many churches already have, that the demand for the CD overtakes your patience with making single copies, there are dozens of solutions out there for mass-producing your disc. And they all fill a different need.

Automated Vs. Tower
What’s right for me?

There are a lot of ways to make copies of your final disc; An automated unit, such as the popular Orbit CD Copier, acts just like a photocopier. You drop your master in the reader, as many blanks as you’ll need in the feed tray, and it loads and copies each one, leaving you with a stack of discs and relatively little involvement with the machine. Some of these systems will connect to a PC, allowing you to both Master and Copy the disc from the computer; they may even include a printer and handle the labeling for you.

On the other hand, a tower duplicator makes sense for a lot of people in CD Ministry. A tower can have up to 10 recorders housed in a single unit, and often towers can be chained together, so that off one master disc you can get 20 discs made simultaneously. While loading and unloading the trays is cumbersome, we have found that this is often the solution of choice for churches for the following reasons:

1. Churches are producing a live event and want to be able to distribute as many discs as possible immediately after the service.
2. Often volunteers are doing the duplication, so buying an automated system isn’t justifiable in labor costs.

So, if you’re like most people, you will want a stack of pre-labeled CDs ready to be duplicated by hand as quickly as possible after a service.

Creating a Plan
Ready to go? Great! Here are a few last points that we have found will make the addition of CDs to your ministry smoother.

The principal movers in your CD Ministry, besides the congregation leader, are the Finance Committee and the Music Ministry people.

The Finance Committee is going to approve the purchase of equipment and consumables. Make sure you bring them a plan that shows appropriate startup costs, and a solution that will be scalable and expandable. The only thing harder than getting the right equipment purchased the first time is going back and getting new equipment six months later because you didn’t plan properly or buy the right equipment. As you look at the features of different duplication equipment, ask about its expandability. Many tower duplicators, for example, can be purchased with only a few recorders and later have recorders added as needed.

The people involved in Music Ministry are going to be your greatest allies in all of this; they may see opportunities in using the equipment that you had never considered. Special Event programs such as Christmas and Easter, Concerts, and other uses of the church facility may create an opportunity for fundraising or recruiting. Get them involved and excited, and they will do a lot of the work for you.

Let’s Wrap it Up

So, I hope I’ve taken some of the fear out of CD and DVD. I realize that many of the people handling technology in the churches are lay people, have other jobs, and don’t have time to re-build the church A/V system. There are people trying to make it easier and faster so that you can do what you do best.

Thanks to CD and DVD technology, the message can be clearer, last longer, and be available to more people. Thanks to you, it will. Good Luck!