CDC eight-32 from CADAC By Trey Blair At the recent WFX Conference and Expo in Dallas, TX, I was the on-site Production Manager for AEGM and mix-engineer for the keynote …

BOSE Makes Worship Come Alive by Joe Cichon Growing up in audio, I have always respected the BOSE product line and recognized their high standards and quality. Years ago, the …

Making Cameras Cableless with Radian Pro By David Woodall Providence Baptist Church, in Raleigh, NC, was founded in 1978 under Pastor David Horner, and has been in our current facility …

PreSonus AudioBox by Jeffrey B. Scott I was recently given the opportunity to try out a package product put together by Presonus, called the AudioBox Stereo Recording Kit at my … 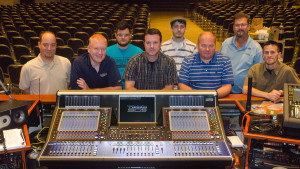 JVC’s GY-HM890 ProHD Camcorder By Mark Varner No matter what size your church is, getting your message (content) outside the walls of your building is a vital component to your …

Saving Time the Right Way: SHoW Baby 5 from City Theatrical By Al Grosskuth How valuable is your and your volunteer servant’s time? Many churches today find themselves in the …