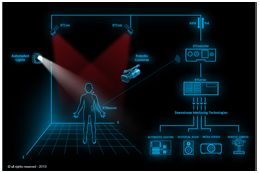 – The CAST Group of Toronto, Canada and RUSHWORKS of Dallas, Texas announce the integration of the award-winning BlackTrax Solution realtime tracking technology with RUSHWORKS’ VDESK Integrated PTZ Production System, adding the extra dimension of robotic camera tracking control to the arsenal of BlackTrax tracking solutions. This integration creates a cost-effective, fully automated realtime video tracking solution for just about anything from live entertainment to houses of worship.

PTZ cameras (Pan, Tilt and Zoom) are typically controlled remotely by an operator using a joystick to “frame” a shot or follow the action … although ”following” is, in reality, more about reacting than truly tracking. Some controlling devices support the creation of presets associated with user-defined positions. Most hardware controllers allow the user to position the camera, and then save that position data to a limited number of buttons which, when pressed, send the camera to those preset PTZ coordinates. More sophisticated systems, like RUSHWORKS’ VDESK, allow the user to provide custom names for each preset and use a touchscreen to select from an unlimited number of saved locations. This system will also AUTO-TAKE the shot when the preset is reached, with the option of fading on a pre-assigned ”lower third” graphic over the shot.

Presets are, by definition, “static” and are not reactive to any realtime data that reflects dynamic positioning of persons or objects. BlackTrax changes all that by tracking persons or objects in the performance area and streaming precise, dynamic positioning data in 3D in realtime. This data is interpreted by VDESK and translated into PTZ camera commands that emulate the techniques of a highly skilled manned camera operator. RUSHWORKS’ name for this enhanced camera control feature is LOCKED ON, which allows a single operator to pr 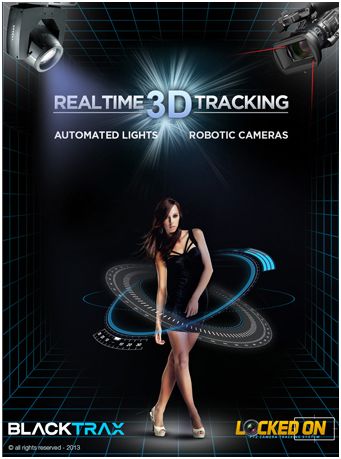 oduce a sophisticated and dynamic multi-camera production with NO CAMERA OPERATORS. The BlackTrax / LOCKED ON integration heralds the first time in our industry that robotic video cameras track one or more objects dynamically in realtime.

Anything tagged with the flip-phone-sized BTBeacon – which carries an IR LED, gyroscope, accelerometer, and tiny wireless radio – is tracked anywhere within a diameter of up to 160ft (the Space) at over 100 frames per second by overhead BTCams, while its orientation is communicated by RF to the BTServer. Should the IR line of sight become momentarily obstructed, the BTBeacon’s onboard inertia measurement unit (IMU) provides double-redundant 3D positioning data via its tiny radio transmitter.

RUSHWORKS has redefined the concept of ‘robotic cameras’ with the introduction of its LOCKED ON™ object tracking technology. The following is a typical production scenario describing how BlackTrax and LOCKED ON work together.

One or more people wear a BTBeacon, which is tracked, in the Space by BlackTrax, and that precise positional data is streamed in realtime to RUSHWORKS’ VDESK software. At this point a PTZ camera (or customer-supplied camera on RUSHWORKS’ pan/tilt head) is assigned to the specific address of each transmitter and ‘locks on’ to the target, automatically following it in 3D space, panning, tilting and zooming based on the subject position relative to the camera.

The VDESK operator has several interface controls that provide customization of the tracking behaviour based on the environmental production requirements. These include offset distance from the LED to the correct framing of the subject; the reactive speed the camera needs to best frame the subject in motion; and the minimum/maximum amount of zoom desired for framing the subjects in the venue.

The RUSHWORKS system uses several computer algorithms to provide ‘fuzzy’ logic that emulates how a trained camera operator follows a subject. For example, when someone starts moving quickly from a stationary position, the camera needs to ‘catch up and lead’ the person, predicting how far in front the camera needs to be based on the speed of the subject. Inversely, when the subject slows and stops, the camera must anticipate the change in motion and reduce the predictive offset, finally stopping smoothly and framing the subject. BlackTrax, delivering accurate realtime 3D positional data, is the only system that generates tracking data fast enough to assure smooth, realtime camera responses.

Gil Densham, President of CAST, describes the operational and economic advantages of such a system. “BlackTrax, integrated into the VDESK LOCKED ON design and function, simplifies entertainment and event production and can reduce production costs substantially.”

Rush Beesley, President of RUSHWORKS, adds, “Integrating BlackTrax with our VDESK PTZ camera control module provides a whole new dimension – literally — in performance and productivity for our customers. It’s incredible to watch the unmanned robotic cameras follow the action so precisely. This is a perfect solution for houses of worship with active ministers, and for performers who cover a lot of stage territory. And on the near horizon … sporting events!”