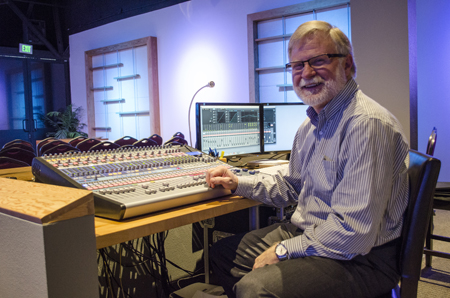 As the old saying goes, sometimes you have to break away to come back home. The faithful who founded Canvas Church know that story well. The founders of Canvas, a small group of self-described “entrepreneurial misfits,” broke away from Irvine Presbyterian in 2011 to form a different kind of church: a church “for people who don’t like church.”

The original congregation has more than tripled in size since then and recently relocated to a larger home. The new digs are, not surprisingly, a bit unconventional, occupying a warehouse space in a relatively nondescript industrial park. The inside, however, is warm and welcoming, and the cozy sanctuary is outfitted with a powerful audio system centered on the new PreSonus® StudioLive™ AI Active Integration™ line of mixers and loudspeakers.

“We do a sort of post-contemporary service, and we’ve typically got anywhere between four and nine musicians up on the stage,” explains Norman Gordon, the parishioner who specified the system and can typically be found running front-of-house. “It’s a full band: bass, drums, guitars, keyboards, and a few vocalists. There’s a lot of stuff going on.”

Gordon recommended the new PreSonus StudioLive 32.4.2AI console, along with StudioLive 328AI full-range speakers and a StudioLive 18sAI subwoofer as the main front-of-house system. “The AI series really had everything we needed,” he explains. “We had a 24-channel analog console we’d been using, and even though we really didn’t need the extra channels right away, we went for the 32-channel mixer because it was the first console released in the AI line.”

For Gordon, it begins with the sound. “Having been an analog guy most of my life, I really love that warm, English, analog sound. It’s something I wouldn’t have expected with digital. I have to say, though, I was really, really pleasantly surprised at how warm and open the console sounded.”

Of course, the StudioLive’s digital features are also well utilized. “We use the snapshot scene memory for a lot of stuff: mute scenes, mix scenes. It allows us to get to things very quickly. And having all that DSP horsepower, with compression and EQ and everything, really enables us to do a lot of very cool stuff.”

Every service gets recorded, Gordon adds. “We use Capture™ software to record the individual tracks in real time, and then we import them into Studio One® for mixing.”

A pair of StudioLive 328AI Active Integration monitors completes the package, with an 18sAI subwoofer for low-frequency reinforcement. “While we were waiting for the speakers to arrive, we had a couple of different loaner systems in here,” Gordon recounts. “It didn’t sound bad, but when we installed the StudioLive speakers and fired them up for the first time, the difference in clarity was just amazing. Articulation is really, really important to me – the ability to understand both the singing and the spoken word. And the StudioLive monitors sounded great right out of the box. They’ve got a really smooth response.”

Gordon reports that the entire congregation has been happy with the new system. “You know what they say about the soundman – if you don’t get any complaints, it means you’re doing your job.”