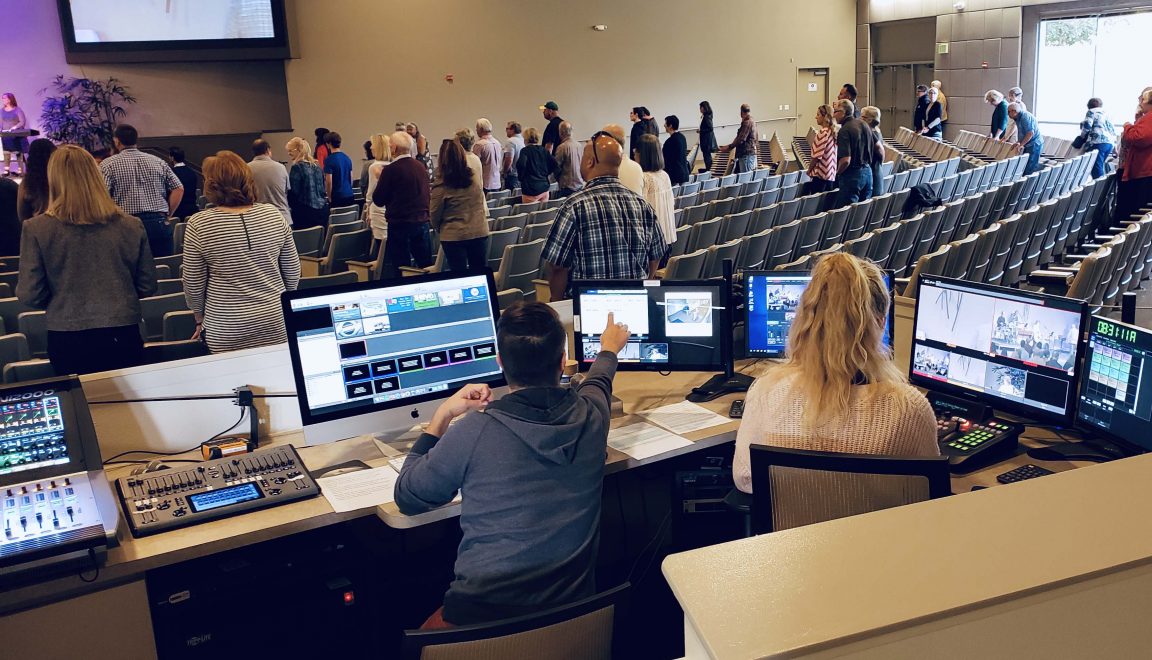 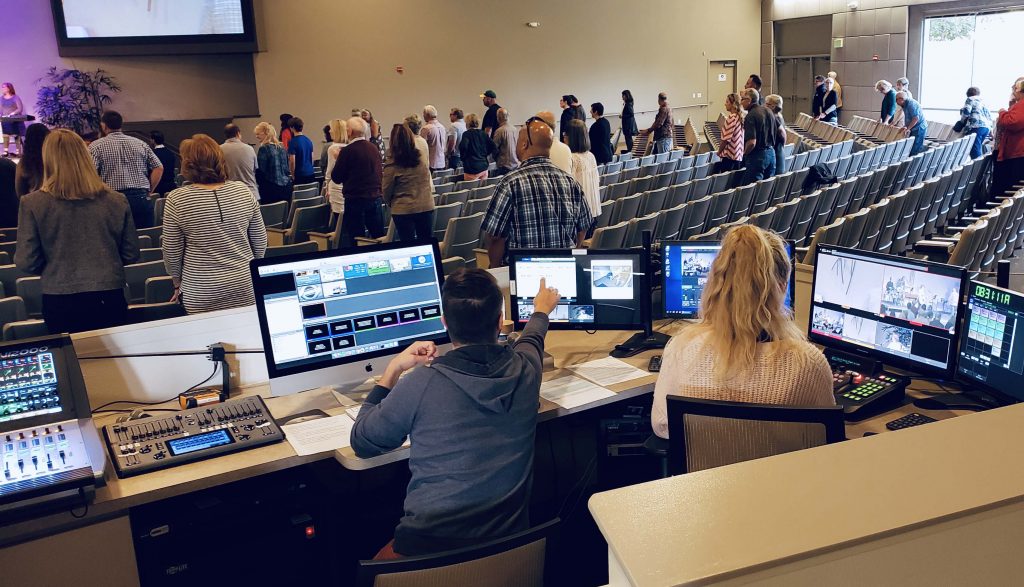 Chelmsford, Mass.  – When Calvary Chapel Modesto relocated its control room in September, it took the opportunity to install a new Broadcast Pix™ BPswitch™ MX integrated production switcher. The church simultaneously produces I‑MAG (image magnification) coverage of its services for the congregation as well as multi-camera coverage for live streaming.

Based in Modesto, Calif., Calvary Chapel is a non-denominational church with more than 3,500 members. Based on a 17-acre campus with 50,000 square feet of buildings, the church offers services five nights per week. Its Sunday and Wednesday services are streamed live, and its Sunday services regularly draw 1,800 viewers from around the world.

For years, the volunteer production team worked upstairs in the church in a separate room with a one-way window that provided a view of the sanctuary. Dave Abbey, media director, said the setup worked well for a while, but eventually the graphics and audio operators moved downstairs. When the church moved the entire production team downstairs earlier this year, it decided to upgrade its Granite™ integrated production switcher and other production equipment. Calvary Chapel contracted Brad C. Shields and Associates in Modesto for the overall integration.

Like the Granite, the new switcher needed to be able to control the three Sony PTZ cameras installed on the back wall of the sanctuary, as well as produce two programs simultaneously. While the I‑MAG production is little more the center camera mixed with lyrics from ProPresenter, the streaming production uses all three cameras with CG overlays and other content.

BPswitch’s PowerAux output provided the functionality Abbey needed, and the church was able to save money by reusing the Granite’s control panel. “It was very important to me that we have the 2 M/E experience without the cost of a 2 M/E switcher,” he added. “It works great, we absolutely love it.”

The new control room is more like a booth surrounded by short walls. “In live production, you generally want isolation, but for us that’s not necessary,” Abbey explained. “Now we have all three techs in the same room, so communication is better. It’s a night and day difference.”

Beyond regular services, the BPswitch has also improved the workflow for memorial services, which were a source for frustration for the video production team. Almost every memorial service includes a video, and Abbey receives content in a wide variety of file formats. With the new BPswitch, Calvary Chapel uses the built-in BPNet™ cloud-based media management system. Abbey sends a link where organizers can upload their video. Then, the video is automatically converted and available for playback on the BPswitch.

Other control room improvements included two upgraded 27-inch monitors, as well as a new Soundcraft digital audio mixer and Dante digital audio network. Calvary Chapel also added a touchscreen monitor in the control room, and use the Broadcast Pix Commander™ user interface to switch the I‑MAG presentation for the sanctuary.