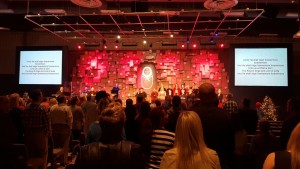 Christmas 2015 began for us, like many other churches, in January 2015. As a staff we decided that we wanted to create something different and outside of the box. Little did we know that in our attempt to think fresh and different we would actually be putting ourselves back in the box, or should I say lots and lots of boxes. Typically I draw inspiration for my stage designs from a number of different places. I will take the individual elements I like from an number of other stage designs and compile them into a new design that is fitting for our context at Mapleview. Our 2015 Christmas design however, came from an inspiration I found in a completely unrelated graphic. It was a 3D rendering of blue bricks forming a floor. It looked somewhat like a cobble stone street with a greater range of depths from brick to brick. I really liked the way the light in the 3D rendering played of of each individual brick. I liked the depth that it had and the texture that it added. My initial thought was “let’s get a giant print made up of this graphic”. I considered creating a 3D rendering in Cinema 4D of presents instead of bricks and having it printed out on vinyl mesh. Then I had the crazy thought “what if we build a real wall out of wrapped boxes and put Jesus at the centre.” I shared my dream with our staff and they too agreed that it was slightly crazy. The time and effort it would take to execute this well would be huge, and the work would be tedious. All things considered we decided we would rally the troops, get all hands on deck and make this dream become a reality.

2015 at Mapleview was the year of “The Return”. As a church we had been focusing on returning back to our first love. We had talked about returning to some of the most essential practices of our faith like reading the word, prayer and worship. So following in suit, our 2015 Christmas Theme was “The Return to Christmas”. So I wanted our backdrop to show that although our world is constantly trying to distract us from the true meaning of Christmas, Jesus should remain at the centre. Our backdrop was created to represent how amidst all of the gifts, family, friends and holiday cheer, Jesus is the true centre of it all!

Here is a brief timeline of the creative process and modifications we made along the way in creating our 2015 “The Return to Christmas” set. 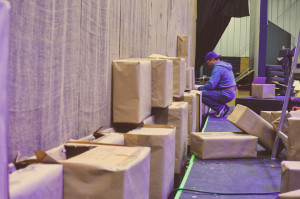 My first sketches of the idea were completed in March of 2015. It included individually wrapped gifts, each wrapped in a different paper. I had roughly figured that about 6-10 different wrapping paper designs would be required to give the random look that I was looking for. I also figured that, based upon an average box size of 2’x2’, it would take about 400 boxes to cover the stage wall which is 48 feet wide by 18 feet tall.

Initial planning began to take place for collecting the required materials (boxes, wrapping paper, tape, screws etc). The decision was made to include bows to the backdrop. Our back wall is built with a plywood face. A few years back this was a very intentional decision. With the random layout of the boxes, we could toe screw them into the wall at any location of our choosing. 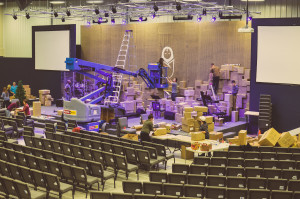 The word was sent out to the church family to start saving boxes and to contact the church office if they had access to large amounts of medium sized boxes. We came to find that the size and quantity of wrapping paper we would need to wrap all of these boxes was unrealistic for our timeframe and budget. Thus, the decision was made to wrap the boxes in brown craft paper and use white bows.

Boxes were starting to come in, thanks largely to a few business owners in our church that have multiple shipments of products arriving at their stores each week. We had the paper, boxes, tape and a small army of volunteers beginning to assemble. We just couldn’t find bows. Well, at least not bows that were large and bright white. So the decision was made to make our own. After doing some research online we found templates for making bows and scaled them to the desired size. We cut out steps of white card stock and were ready to go. Volunteers were in the church office over the course of the month to begin assembling the bows. 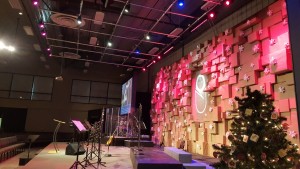 A few volunteers spent the evening (6 hours or so) tapping the boxes into shape. Most of the boxes had come to the church flattened.

More then 30 people arrived at the church at 8am. There were people everywhere: wrapping boxes, making the remaining bows, and toe screwing the boxes to the wall in formation. An artist from our church projected, traced and painted the centrepiece of our set, the Jesus symbol in the centre of the wall. By noon all of the boxes were wrapped, our centrepiece was painted on the wall and all of the bows were completed. A few remaining volunteers, about 8 or so, finished building the wall and hot glued the bows in place.

Now we could clear the mess, step back and turn on the lights. Wow, what a sight to behold as the boxes reflect the colour of our choosing with the white Jesus symbol in the centre shining even brighter as the white reflected the light more intensely then the brown craft paper. The response from our church family and others visiting with us has been overwhelming. Just as in real life, in our backdrop Jesus was the bright shining light at the centre of it all.

The lights currently showcasing our backdrop are on loan from AC Lighting, and consist of  24 Chroma-Q Color One – 100 RGBA LED pars and  9 Chroma-Q Color Force 48’s linear LED battens, all controlled via a Jands Vista S1 lighting console. Look for Technologies for Worship Magazine January 2016 Technology Spotlight for a more in-depth look at the how Mapleview Community Church used these lights to highlight our Christmas production!

Michael Fess is the Artistic Director at Mapleview Community Church in Barrie, ON, CANADA