A New Studio Camera for a NOW Church

One of my jobs is to oversee all technology for NOW Church in Ocala, Florida, and we are known for our diverse and multiracial congregation with high-energy worship and outside the box creativity. Our service experience is more like a rock concert than a religious gathering, complete with smart lights, 7.1 surround sound, and a giant HD multimedia screen. Since July 2013, when we started live streaming our services for the first time, we’ve been using a combination of Blackmagic Cinema and Pocket Cinema Cameras attached to a Blackmagic ATEM 4K switcher. The results have been astounding!

Being familiar and very happy with our Blackmagic products, when they announced the new Blackmagic Studio Camera HD & 4K at NAB 2014 I pre-ordered two of the HD versions, and two weeks later we were using them as the main two cameras of our thirteen camera setup. At first glance, you’ll notice the Studio Camera does not look like your typical studio camera, and that’s because it isn’t. The design is outside the box. It’s smaller and more lightweight than you’d think, but still feels solid and well built.

The Studio Camera has a lot of features, including an SDI output, selectable resolutions up to 1080p at 60fps, and tally light capabilities. There were also several features we were not expecting; a large built-in 10” high resolution viewfinder with sunshield attachment that is nice and bright, optical fiber in and out, two analog microphone inputs with phantom power, LANC port which provides focus and iris control on certain lenses, program monitor view, plus a built-in talkback feature so you don’t have to buy a separate talkback system.

One of the most anticipated features recently released in a firmware update is the Remote Camera Control feature. This allows the Blackmagic Design ATEM Live Production family of switchers to control camera settings, plus iris and focus depending on which lenses you choose; features comparable to a studio camera’s CCU, including unprecedented live control with a full DaVinci Resolve primary color corrector. The coolest part is all of this information travels through SDI or fiber, so no additional cabling required. Keep in mind, to use the tally and camera control features, it requires two cables from the ATEM to each camera, one output and one input.

One of my biggest complaints is the lack of compatible lens options. The studio camera on display at NAB featured a $40,000+ broadcast ENG lens with an adapter, and of course that’s not practical. The camera is made to support active MFT lenses, but with lens adapters becoming more prevalent you really can use almost any lens, but there are some things to be aware of. The cheapest lenses are photography lenses either fixed or zoom, but if your team is made up primarily of volunteers like us, I strongly recommend spending a bit more to get an active MFT lens with autofocus and iris, so you take full advantage of the cameras features. This includes tapping the camera’s focus button once or hitting the focus button on the camera control software on the ATEM to automatically adjust focus, as manual focus on photo lenses can be touchy and challenging if your subjects are constantly changing depth of field. Long zoom lenses can get expensive, so decide the length you need to cover for the price. For example, our camera one position is in the back of the room which needed the longest throw. So we chose a 50-150 f2.8 lens that allows us to go from a full-body shot to tight shot from approximately 60 feet away.

Camera two comes from more of a side angle and has a 12-35 f2.8 lens, going from a wide shot up to a full-body shot. In addition to our two Studio Camera’s, we use several Blackmagic Pocket Cinema Cameras through HDMI to SDI converters, which are an economical compliment to the Blackmagic Studio Cameras, seeing they run off the same chip. I am holding out hope that a future firmware update could fix some minor annoyances, where the white balance and gain between the Studio Camera and Pocket Camera could match a little better and that the Pocket Cinema Camera would shoot at 60fps like the Studio Camera. Currently it only shoots up to 30fps. Because of this, our church runs a resolution of 1080p at 24fps and are using the new Blackmagic ATEM 2 M/E Production Studio 4K Switcher.

Keep in mind the studio camera was designed for active MFT lenses, so support for iris control will not be available through third party lens adapters, which is not ideal for some studio environments. However, color correction still seems to work in our testing regardless of lens type. Any zoom controls need to be powered independently, as the camera will not support it. I really do think Blackmagic is onto something with the studio camera. It’s definitely not for everybody, but it’s unique, loaded with features, and most importantly it’s the most budget-friendly studio solution on the market today. Just know going in what to expect and be willing to sacrifice those features at least for the time being. 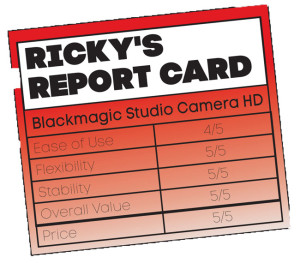 I am hopeful that more compatible and more affordable broadcast lens options with zoom and focus controls will soon become available. There seems to be a gap in the market for broadcast-type active MFT lenses with zoom and focus controls. Who knows? We may even see a B4 mount version or other models on the horizon that helps to remedy this, but until then we are extremely happy with our Studio Camera’s and I will continue to incorporate them into many of my camera system designs for churches, along with other Blackmagic Design products.

Ricky is a 2-time Emmy® Award-winner with over 15 years in broadcast television and corporate branding, and started his father’s television ministry at NOW Church in Orlando, FL.