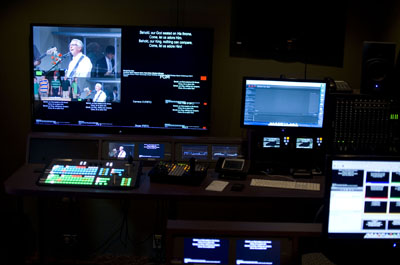 When Bethlehem Baptist Church was looking for a reliable video/audio solution for recording and playback of weekly services among the house of worship’s multiple campuses, it turned to the PIX 260i Production Video Recorder from Video Devices, a new brand of Sound Devices that is dedicated to the company’s mission critical video products. The church utilizes five PIX 260i’s to ensure the highest quality video and audio when rebroadcasting sermons to the campuses.

Comprised of three campuses (Downtown, North and South), Bethlehem Baptist Church hosts multiple services a week. In order to ensure that all three campuses have a current sermon from the main pastor, Associate Director for Media Ministries Jonathan Davis records the Saturday night service using the PIX 260i. He then sends the recording for playback to the two campuses not being served by the preaching pastor, on a particular Sunday morning. Recorded files can be transferred over Ethernet or delivered on one of the four drives that the 260i is able to simultaneously record to. The Downtown and North campuses feature a full production setup, while the South Campus is a portable campus at a local high school for the Sunday morning services. The Downtown and North campuses each have two PIX 260is, and the South campus has another.

The PIX 260i’s extensive audio capabilities are an essential component for the facility. The facility records both the mono- and stereo-feed of the house, as well as an iso of the pastor’s mic. Using the PIX 260i, the facility is able to send and receive all audio over Dante to and from its Yamaha CL5 mixing system. In order to cater to its ethnically diverse members, Bethlehem Baptist Church also records live Spanish and Russian translations. The multiple track count gives the facility room to grow in terms of having additional isolated audio tracks available, when needed. In addition, with only two full-time media staff members, the facility needed a user-friendly solution to cater to its large volunteer base. The PIX 260i’s large display and easy-to-use controls enable non-professionals to use the equipment with ease on an ongoing basis.

“We found that the PIX 260i met all of our criteria, and most importantly, it was seamlessly incorporated into our existing AV system,” says Davis. “The PIX 260i gives us ultimate flexibility in being able to record content from SDI or HDMI, and to get that content back out just as easily. In addition, the PIX 260i allows us to take whatever we record and deliver it directly into our post-production workflow in order to post services online as well as streamline our other productions.”

Davis and the church are already familiar with the company’s products, as they have used its PIX 240i recorder for on-location productions. “We found the PIX 240i to be very proficient and an improvement to our workflow, so when we heard about the PIX 260i, we knew we had to give it a look. It sounded perfect for what we needed,” says Davis. “We needed something that was rock-solid reliable, because when it comes to church services, it is a timed event. There isn’t a backup and you don’t get a do-over. The Video Devices PIX 260i gives us the reliability and redundancy we need to ensure that we capture the services and are able to play them back at both our fixed and mobile locations.”

The PIX 260i brings the features and tools needed by production companies and other production-based AV environments looking to migrate to file-based recording and playback environments. It records either QuickTime files in either Apple ProRes or Avid DNxHD video formats or WAV format audio files. Files recorded with Apple ProRes or Avid DNxHD are ready for editing in common editing environments, such as Avid, Final Cut Pro and Adobe Premiere, eliminating time-consuming transferring and transcoding. For color-critical applications, the PIX 260i supports Apple ProRes 4444 through its 12-bit, 4:4:4 3G-SDI I/O. Users can also play out files from the PIX 260i for real-time applications.

“The customer service that we receive from Sound Devices has been absolutely amazing,” adds Davis. “One of my favorite things about Sound Devices is how proactive they are in sending out firmware updates — not only do they fix any potential bugs, but they add new features, which is rare today. They take such great care of their customers.”