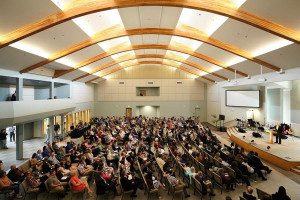 Bellevue, Washington-area Calvary Chapel Eastside has been in the works for several years. The building project began nearly a decade ago, while the assembly was still worshiping in Bellevue College on Sundays. Slowly but surely, the congregation built up savings, constructing the church building in stages over that time. They were also paying attention to the technology that would support their message in the church, choosing platforms that would set them apart and take them far into the future. These included an L-Acoustics ARCS WIFO PA system and a Roland M-5000 OHRCA Live Mixing Console. This impressive sound system was installed by nationally-known AV systems sales and integration provider CCI Solutions.

“It’s been a slow build, but they have been taking their time to do it right, and the choice of the M-5000 console reflects that,” says Todd Gathany, Director of Operations for Systems Integration at CCI Solutions and the lead project manager on the Calvary Chapel Eastside installation. In a way, he acknowledges, taking their time worked in their favor in ways that couldn’t have been foreseen. In the last few years, the Dante™ network protocol has become widely accepted as the digital networking backbone for many types of facilities, including houses of worship. “The addition of the Dante card for the M-5000 meant that it can sit on a very robust network that we’ve extended throughout their new building,” says Gathany. “So the M-5000 offers them excellent operational features, great sound and network capability. That’s a great combination for any house of worship.”

Gathany says that Calvary Chapel Eastside’s Technical Director and front-of-house mixer, Kam Dahlin, immediately recognized the console’s advantages and benefits for the church. “We’re a volunteer-only organization, so we needed a console that’s easy to use, but also has the power and flexibility to handle larger, more demanding events and artists.” he says. “But while we also liked that it’s compatible with Dante, it’s also able to work with other open-architecture protocols that may become widespread in the future. We are starting to see other AES67-compatible protocols come along, and we don’t really know how audio networking will take shape in the future. The M-5000 gives us the flexibility to accommodate future changes in technology. When the time comes, I may only have to go to our leadership and ask for a new upgrade card instead of a new console. That’s a huge advantage.”

Dahlin, whose background is in audio production, is also pleased with the sound of the M-5000. “Super transparent,” he says. “The EQ, gating and compression are clean and even. The mic pre’s don’t sound digital. The system offers all the power tools and routing you need, but at the surface it is very approachable and volunteer friendly. All in all, it’s a great console to mix on now and a great investment for the future.”