LED walls are increasingly being used in HoW worldwide as prices become more affordable. Once considered a tool for only the largest mega-churches with budgets to purchase them and the staff to operate them, LED walls are now within reach of smaller organizations with more mainstream budgets. Here we discuss three important aspects to consider before purchasing an LED wall. 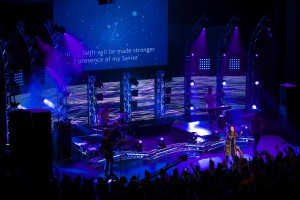 The color emanating directly from an LED is very vivid, and very high in contrast – many will say that content on an LED Video wall “really pops.” LED video walls have no problem competing with ambient room light, and they also coexist quite well with theatrical lighting.

Depending on the pixel pitch chosen, a single cabinet can have over 16,000 3-color LEDs. While conversion from Nits (the measure of light output often used for LED walls) to Lumens (the measure of reflected light used for projection) is not a direct process, since one involves area and another does not, even a modest 1200 Nit LED wall is significantly brighter than most single projectors are capable of. This is why in high ambient light situations, projectors are often “stacked” – two devices sending the same image to the same screen to meet minimum brightness requirements for the venue. By comparison, a 1200 Nit LED wall would actually be too bright in some more theatrical-style church lighting situations.

So what’s the bottom line on brightness? You really need to experience an LED wall to understand. It is my belief that 1200 nits is plenty of output for an LED wall on a theatrically lit stage (and you probably won’t even run this at full brightness.) For a more open, naturally-lit space, you may need 1500-2000 Nits. 5000 Nit and above specifications are needed for outdoor LEDs only. Due to its direct-view nature, an LED wall is not threatened by any theatrical lighting that may wash onto the screen area – and most of the time it will push right through that light spillage without having a dramatic impact on what you see. This is something that is very difficult for any indirect-view solution to compete with.

High Contrast
Contrast ratio is a term very familiar to anyone who has reviewed specs for any type of display device, and it’s also one of the most misrepresented specifications available to the buyer. To compare one device to another using the Contrast Ratio, one must first know what type of Contrast Ratio test was employed. If two devices used different tests to arrive at their results, then the two numbers are irrelevant to each other, and the value is meaningless for comparing that specification. Because of this, contrast is also best experienced live with a direct-view LED display, where the difference between the lowest luminance and highest luminance is very dramatic. Remember that in most projection to project black, a black mask has to be formed over that pixel of light, or that square of the DLP chip has to be turned off. Because of light bleeding from other parts of the visual path in projection, the best you get is a very dark grey. Dynamic contrast control, present in some higher end projectors helps this greatly by varying the light engine output using an iris, but with an LED, black is simply that pixel completely off – resulting in very high contrast.

You will not find many LED walls with legitimate Contrast Ratios quoted, because contrast measurements involve factoring in the area being measured. Since LED walls are modular, and it would be rare to ever use a single module except maybe in digital signage applications, quoting the contrast ratio for a single LED cabinet would be somewhat irrelevant. Again, rather than depending on a vague number, the contrast of an LED Video wall is best experienced live to gain a reference.

New Scenarios not possible with projection
The idea of having a “wall” of video directly behind a stage is a difficult challenge with projection, but is easily done with an LED video wall. If we were to use projection to cover the same area with multiple edge-blended projectors, we would either need a very deep stage (to avoid the stage members casting shadows in the projection image) or we would need to rear project, and most would find it rare to have the required depth behind the stage to do so. With an LED Video Wall, we mount or suspend the wall directly in front of the rear stage wall, and one could stand directly in front of it without shadow since the image is emanating directly from the wall (not being projected from in front and above.) Also using this same stage back wall as an example, it would be difficult to match projection at the same perceived brightness because of the surface area being covered – and might even require multiple “stacked” projectors (two projectors covering the same area, in perfect alignment to each other.) An LED wall behind a stage may even remove the need for lighting to counteract shadow effect from other forward-mounted lighting fixtures. 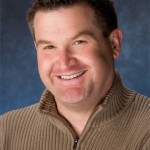 Bryan Cole is the founder of Axia Concepts, bringing high end creative audio, video, lighting and IT solutions to the local church using a unique, people-centric approach to technology.