HD by Design at Lakewood Church 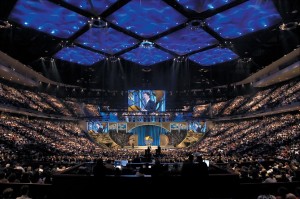 Back in 2005, Lakewood Church relocated to the Compaq Center, a 16,800-seat facility in southwest Downtown Houston that gave us twice the capacity of our former sanctuary in northeast Houston. The $95 million upgrade of the building and subsequent move of our worship services into the new space were critical in enabling us to accommodate our rapidly growing congregation. Today about 43,500 people attend the services — four English-language services and two Spanish-language services — led each week at our central campus by Lakewood Church Senior Pastor Joel Osteen and his wife, Victoria, who serves as co-pastor.

When we first acquired the new building, which had previously been the home to professional sports teams including the NBA’s Houston Rockets, AHL’s Houston Aeros, and WNBA Houston Comets, we added a five-story building, the Family Life center, onto one end, creating 27,000 square feet of space to house our audio and video production operations. The 5th floor of the center is home to our video and audio production control rooms, audio recording studios, postproduction, editing and graphics rooms, and our central technical equipment hub. To keep costs down, we moved much of the SD equipment from our old site to this new facility. Systems integrator BeckTV assisted us in making that move as smoothly and cost-effectively as possible.

Internally, we had started planning for this project in 2002 or 2003. I had worked with Beck on other projects and had received strong referrals for the company and its engineers, so we chose to bring the company in to consult on the project. When it came time for the move, they knew exactly how we operate, and we both knew what to expect out of the project and one another.

Given the success of that first project and BeckTV’s knowledge of our broadcast operations, we chose to work with them again when we undertook the move to HD and 5.1-channel surround sound. Though we are continually improving our facilities and operations, this was the most significant upgrade we’ve ever made to our broadcast infrastructure. We had invested in HD cameras and lenses with the move to our new facility in 2005, but we completed our HD migration by replacing routers, switchers, and monitors and by bringing new HD decks into the mix. Though the cabling and DA frames in place were HD-ready, we added up/downconversion processing into the workflow to support worldwide delivery in the appropriate standards and formats.

The project itself was completed ahead of schedule and within the budget that we had formulated along with BeckTV. While these factors were significant to us, the most important outcome was our ability to create a much-improved on-air product and experience for the home viewer.

We offer seven services each week, and the five services we hold each weekend start on Saturday night, followed by two services in English on Sunday morning, then a Spanish-language service, concluding with a young adult service Sunday evening. As we produce these services and acquire audio and video within the sanctuary, we use all camera feeds and the switched program that’s fed to the sanctuary to create the broadcast product for broader distribution. For those worshiping with us on site, we’re adding song lyrics and other helpful elements to video shown on LED screens in the sanctuary. We’re also creating an output for live streaming to the Web, so that members who can’t make it to church for any one of our seven services still can participate in the worship experience in real time.

In completing this shift to HD, we gained the ability not only to provide in-demand content to all of the outlets offering their viewers HD content, but also to produce a better product for international distribution in accordance with different broadcast standards. Today our weekly services are broadcast on networks including ABC Family, USA Network, Lifetime, Discovery as well as Trinity Broadcasting Network and Daystar Television Network; and local channels in most major U.S. markets. Pastor Osteen’s sermons are televised in more than 100 countries, with millions of viewers each week. 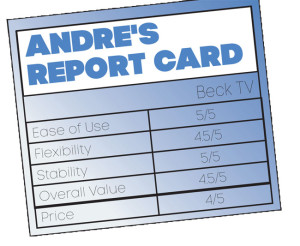 Though production of HD content has increased the overall time required to deliver content, we have  realized new efficiencies in establishing a largely file-based production workflow. Most important, we have been able to improve production value significantly and provide a much larger audience of broadcast viewers with the stunning high-resolution pictures possible with HD.

In all honesty, not everyone in the sanctuary noticed when we made the move to full HD, but the target audience — viewers at home — have seen a big change. Our programs simply look better and sound better, which makes for a more powerful experience of our worship and praise messages. Thanks to our ongoing collaboration with BeckTV, this transition was smooth and painless for us and virtually invisible for our members.

Andre Guidry is the Chief Engineer at Lakewood Church