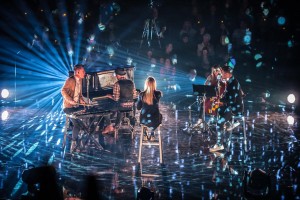 The Biblically-based Bayside Church draws some 10,000 worshippers to its six weekend services.  The sanctuary holds about 2,400 people in a multi-purpose space with retractable seating and a stage, which can be partially removed to open up the floor.  Two 12×22-foot front projection screens, displaying IMAG, song lyrics, video and PowerPoint, are also movable.

Last year the church upgraded to a grandMA2 Light console for lighting control and added a roster of Martin Viper Profiles, Viper Washes and Aura Washes to its lighting package.  The next step was a lighting network and distribution upgrade, moving from an existing set of DMX lines and multiple Ethernet networks running to the stage and back.

“Bayside Church is like a touring production that doesn’t tour,” says Carr.  “The church’s lighting had been handled by dumb switches – multiple lighting networks throughout the building.  But they were getting old and needed to be upgraded.”

In addition, the entry-level nodes in use had injected data issues and latency into the system.

Carr had been using LUMINEX switches for the past year as the network backbone for front of house and the stage on the Eli Young Band tour.  “They were flawless and reliable – a great solution,” he reports.  So LUMINEX was front of mind for Bayside Church’s upgrade.

“Initially, when I spoke with Bayside lighting designer Alec Takahashi, we were going to start with something small, like a LUMINEX node.  But then we decided to add the switches and hubs and build a single, solid network backbone that would be reliable for many years to come.  We wanted to get everything done early in November so the system would be up and running for the busiest time of year: the Christmas season.”

“LUMNEX seemed to be a very solid system, so we purchased an 8-port node that serves as our primary network infrastructure with the switches as back ups,” says Takahashi.  The system incorporates the media server and runs MA3D.

The slate of Christmas services proved to be “a very good test” of the new LUMINEX network, he notes.  Bayside Church held 16 services from December 18-24, each about 90 minutes long and featuring carols, candle lighting and a message from the senior pastor.  A special 360º circular screen, 21 feet in diameter, was hung above the stage with a circular lighting truss inside it; seating for the congregation was in the round.

“Before, the church was only wired for two DMX lines.  With LUMINEX we’re set up for eight DMX ports, and we used eight for Christmas,” says Carr.  “We were able to control the projection network over LUMINEX along with the MA console network and the media server network.  The lighting data distribution was done over LUMINEX, too.  It drove all the content with live feedback of video into the consoles and remote computers at the control center.”

“Our rig was a bit bigger than normal for Christmas,” says Takahashi, “and LUMINEX worked seamlessly.  We didn’t have to use our back ups but we had tested them, and the system worked seamlessly with them, too.”

“Bayside Church has a technical team and a team of volunteers, and they don’t have to deal with the system once it’s been configured,” says Carr.  “All the web interfaces are easy for them to understand.  You don’t have to be an IT person to master them.”

“We expect that LUMINEX will serve us well for the next five to eight years,” says Takahashi.  “We plan to purchase another system for our new campus in Rocklin, California, which will launch in a few months” to accommodate a growing population of worshippers in the area.