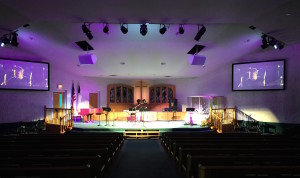 For Bayside Baptist Church, located in the small city of Superior, Wisconsin, just across a bridge from Duluth, Minnesota, there was no way to anticipate how rapidly their congregation would grow and change. In fact, with demand outstripping their sanctuary’s 250-person capacity, they began performing two services instead of one to accommodate all of their congregants. Meanwhile, worship was evolving to include multimedia and live performances with full rock instrumentation, placing even greater demands on their aging backline system. They realized it was time to invest in a professional audio solution that would deliver a seamless church-going experience. The church reached out to Caleb Dick of Excel AV Group, who overhauled their sound system with Powersoft amplification.

“They had first contacted us just about upgrading their projectors and screens,” says Dick, “but they mentioned being dissatisfied with their current sound system, so I talked them through some of what was possible with Powersoft amplifiers.” As Dick continued to work alongside Bayside Baptist IT administrator Shane McCotter on the visual overhaul, the church decided to invest in a completely revitalized sound system. “The system in there was aging and consisted of lower-grade equipment,” Dick says. “The coverage was lacking, sound quality and intelligibility were poor, and the sightlines were obtrusive.” Dick knew this could be improved, and that new equipment could make a difference in delivering a dynamic worship experience. “There’s a lot of exciting, loud music that’s part of worship these days, so we wanted to provide plenty of subwoofer power and some extra output overall,” he says. The Excel AV team assembled a package that included Powersoft amplification driving Fulcrum speakers that was an ideal fit for Bayside Baptist’s 250-seat sanctuary.

He chose a pair of Fulcrum DX1526 speakers driven by a Powersoft K10 DSP+AESOP for the main front of house speakers and a pair of Fulcrum TS215 speakers powered by a Powersoft K3 DSP+AESOP for the subwoofers, which were small enough to be tucked under the stage and out of sight. The system was rounded out with an Allen & Heath Qu-32 mixing board. Powersoft’s remarkable efficiency allowed Dick to complete the install using the existing circuit count, eliminating the need for an expensive power upgrade. The Powersoft amplifiers were able combined to provide the perfect combination of a smooth and distinct low-end with plenty of crisp, clear high end, and Powersoft’s onboard DSP with Armonia software contained all of the tools Dick needed to tune the system. “We’ve used Powersoft DSP before and having access to that really great EQ is tremendous,” Dick adds. “Plus with Powersoft we can just take the FIR files from Fulcrum, load them into the amp, and the tuning’s almost done.” The amplifiers’ miniscule footprint was equally critical, consuming only one rack space per unit, leaving plenty of room for their six Sennheiser wireless receivers.

Fidelity Without the Fuss

When the church staff first turned on the new system in, the improvement was noticeable. The church’s sound engineers ran a variety of sound sources through their 32-channel board and were amazed with the clarity and musicality. “They were telling me how they’ve been fighting with these kinds of signals for years and this was the first time they could just turn it on with it sounding awesome,” Dick recalls.” He noted that church staff was especially appreciative of the coverage. “We’re within 2 db just about anywhere in the house, so it’s really consistent,” Dick says.

Bayside Baptist church is confident that that they made a good choice with their new sound system, which not only addresses their current needs better than ever before but gives them plenty of room to grow. “They chose to work with us because they could tell we really knew the technology we were working with, and we chose and continue to choose Powersoft because it’s the best amplifier for the job,” says Dick. Bayside Baptist Church may yet have to expand if growth continues apace, but Dick knows they can use their Powersoft amplifiers as a solid foundation for future growth. “We use them quite a bit and they really last.”