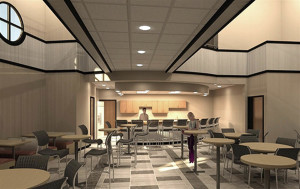 Starting out with just 96 members in 1969, St. James United Methodist Church has grown into one of the largest Methodist churches in Arkansas with over 3,600 members. Nestled in West Little Rock, the church recently concluded a successful capital campaign resulting with enough money to build a teen bistro, eight new classrooms, and the Jones Fellowship Hall, among other facilities and upgrades. The church decided to hire Memphis Sound Lab from across the river to design and install sound reinforcement systems for the new spaces, and Memphis Sound Lab in turn relied on Ashly Audio’s combined processor/multi-channel amplifiers and intuitive user interfaces to give the systems a solid backbone with user-friendly access.

“I love turning Ashly controllers over to clients,” said Charles Lawing, owner and manager of Memphis Sound Lab. “They’re small, easy to customize, and simple to use, and clients always delight in taking control of their new system without the hesitation or uncertainty that can so often come with more complicated interfaces. Ashly’s full line of combined processors and amplifiers gave us a lot of options for building these systems out. Moreover, Ashly’s proven record on reliability will be a huge asset to St. James United Methodist. They’ll be able to use these systems day-in and day-out for years and years without a hiccup.”

The bistro features a kitchen, a juice and coffee bar, and plenty of comfy bar, booth, and table seating so that teens can hang out in a fun, free, and supportive environment. Memphis Sound Labs repurposed microphones and other input sources and added a Tascam combination CD player and mobile music device input. Those inputs feed an Ashly Pema 4125.70 combined 8-in x 8-out Protea™ digital matrix processor and four-channel 125W network amplifier, which power four ElectroVoice Evid 6.2 loudspeakers and other ceiling speakers. Staff can select from among the inputs and change how “bumping” the bistro is with a simple Ashly WR-5 wall-mount remote control.