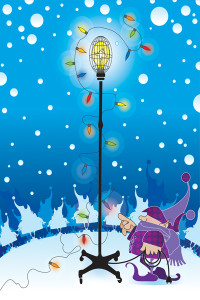 The PLASA Foundation announces its 2015 Behind the Scenes Holiday Cards featuring five wonderful new designs by William Ivey Long, Robert Mendoza, Court Watson, Paul Weimer, Paige Weintraut and the return of a favorite design from the past by Bruce Rodgers.

Three card ordering options are offered: personalized cards with a company logo and custom message, card packs of 10 with a standard greeting, and electronic versions for delivery by email. Orders will be taken until September 14, 2015 to arrive by late October. All proceeds benefit the Behind the Scenes charity which provides financial assistance to entertainment technology professionals who are seriously ill or injured. View and order cards at www.behindthescenescharity.org/holidaycards. For more information, please contact 212-244-1421 or holidaycard@behindthescenescharity.org.

William Ivey Long’s costume designs on Broadway have received 19 Tony nominations. He has won Tony awards for six productions, most recently Rodgers and Hammerstein’s Cinderella and Grey Gardens, and an Obie award for Sustained Excellence of Costume Design. He has also designed costumes for Mick Jagger, The Pointer Sisters, The Paul Taylor Dance Company, Twyla Tharp, and Peter Martins. Mr. Long has served as Chairman of the American Theatre Wing since 2012.

Robert Mendoza is a New Jersey based artist and author whose influences include the fantastical and the mythological. Born into a family of artists, poets, and musicians, he has had the unique fortune of being exposed to the richness of his Cuban heritage at an early age, giving him a very eclectic appreciation for the arts. Since his graduation from the School of Visual Arts as an Illustration major, Robert has worked as an art director and designer in both the print / publishing and advertising industry.

Court Watson is a set and costume designer whose work has been seen in opera houses, theatres, and theme parks around the world including Glimmerglass Festival, Goodspeed Opera House, Shakespeare Theatre, Salzburger Landestheatre, Deutschestheater in Munich, Busch Gardens and SeaWorld. He is a two time First Place winner at the Southeastern Theatre Conference and won the Barbizon Prize at the Kennedy Center / American College Theatre Festival.

Paul Weimer has served as the Associate Scenic Designer for the Broadway productions of The Curious Incident of the Dog in the Night-time, Matilda, Waiting for Godot/No Man’s Land, Ghost, Shrek, Spamalot and many others. He will be joining the faculty of the University of Southern Indiana in the fall of 2015 as an assistant professor of scene design and resident designer of the New Harmony Theatre.

Paige Weintraut is a sophomore at the Mt. Vernon Senior High School Fine Arts Academy (Mt. Vernon, IN). Always fascinated by the visual arts, Paige is especially interested in graphic design and 2-D art. Recently she was recognized by the Evansville Philharmonic as a winner of the “Symphony of Color” art competition. Paige is honored to have her work selected for this year’s holiday card campaign and to help support such a great cause.

For more information about Behind the Scenes, to donate, or to apply for a grant, visit www.behindthescenedscharity.org.