Established in 1968 and sponsored by the Olympic Committee, the longstanding International Children’s Games branched out in 1994 with the launch of the Children’s Winter Games. This year the competition was held in Lake Placid, New York, giving young athletes from across the globe the chance to compete at the highest level in a wide range of winter sports. But while the Games are all about exceptional sporting achievement and fostering the exchange of ideas between athletes from different countries and cultures, it’s also about putting on a memorable show for the spectators. And that’s where ADJ comes in. 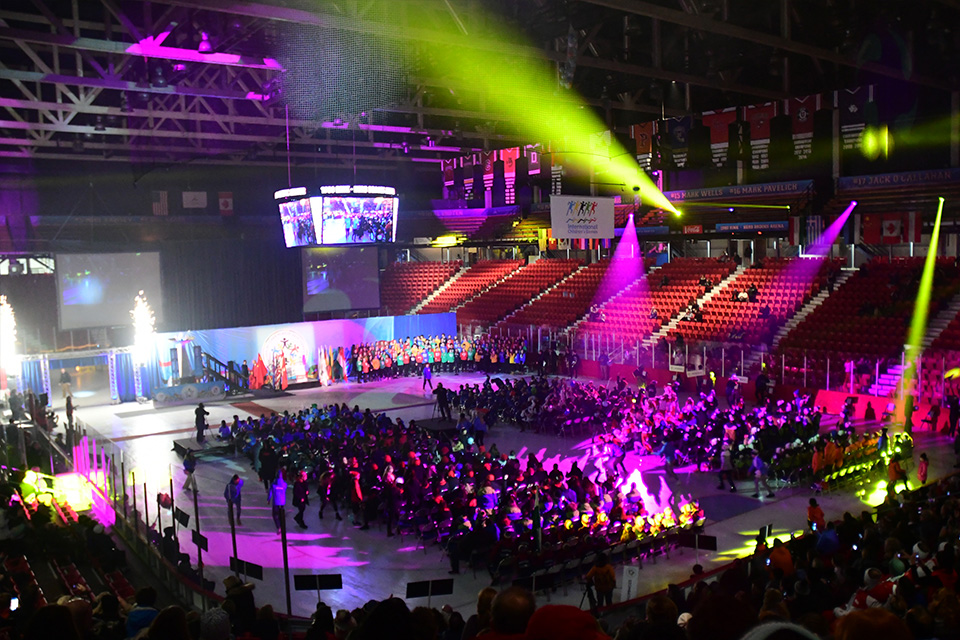 Having worked with the historic Olympic Centre on countless competitions, lighting designer Eric Wilson was brought in to deliver an epic lightshow for the Children’s Winter Games opening ceremony, jumping at the chance to work on a prestigious sporting event that was headed to the US for the very first time.

Part of the challenge for Eric was translating the event’s ethos and themes into a lightshow, while considering the practicalities and limitations of lighting a large 8000-capacity venue. A long-time user, he called on a wide range of ADJ’s versatile fixtures and controllers to actualize his vision for the opening celebrations.

Inside the large arena, 12 ADJ Vizi BSW 300s and 12 ADJ Vizi Beam RXONEs formed the crux of the lighting setup. The ceremony was laid out in a horseshoe shape, with a central facade and truss archway forming the visual focus for the audience up in the bleachers. To ensure enough coverage across this large space, Eric placed the moving heads up in the bleachers, spacing them out approximately every eight feet.

“The moving heads ran all the way round the horseshoe,” explained Eric. “We used the BSWs for a combination of tight washes and wider washes with a prism effect. So we did shoot a GOBO, but we used the prism to blur it and then added rotation, creating this unique water effect – so much more than just a straight wash! I am also very familiar with the capabilities of the RXONEs, so I knew that the tight 3-degree beam angle would do exactly what I wanted for aerials.”

And boy did they deliver. Together, the Vizi BSW 300s and Vizi Beam RXONEs accomplished a big-impact display, with the former washing the ice in lush colors – drawing on its potent 300W output and variable 18 ~ 26-degree wash beam angle – and the latter creating stunning mid-air effects thanks to its super-sharp 3-degree beam angle, smooth micro-stepped movement and choice of 14 colors plus white and 15 GOBOs plus spot. But when it came to the Vizi BSW 300s, the role they played went even further.

“The BSW 300 is an incredibly versatile unit and we used it predominantly for the washes. But, because it is a hybrid fixture, it also offered us so much more! When the torch came in, we used them to create a search light effect, and that looked pretty damn cool,” Eric told us. “When I designed this event, that was kind of the idea; I needed to be able to light up the athletes on the ice as well as create aerial effects, and the BSWs could cover both jobs.”

Before the ceremony actually started, it was 8 ADJ Vizi Spot Pros that put in the work – projecting custom snowflake GOBOs to tie in with the winter theme. This meant that Eric could save the Vizi BSW 300s and Vizi Beam RXONEs to deliver maximum impact and excitement when the ceremony got underway.

“My Vizi Spot Pros are around ten years old but are still going strong and weren’t out of place in the arena setting. Obviously, they weren’t as bright as the BSWs or RXONEs, so we primarily used them for the pre-show. They did a great job of projecting snowflake patterns so that they appeared to float around the arena – both on the ice and around the bleachers – as people were being seated. Then, when the show started and we fired up the newer moving heads, we were able to create real impact.”

As most lighting designers / production managers will attest to, it’s very rare that any event goes without a hitch; something to challenge you and force you to get creative with your lighting fixtures. For Eric, this challenge came by way of a lost GOBO – the day before the Games!

Eric had promised his clients that he would project the Games logo as well as a sponsor logo down onto the ice, and had arranged for custom GOBOs to be created for the BSWs. However during setup one of the crew managed to lose one, throwing a real spanner into the works. Not wanting to disappoint, Eric re-created the logos on transparencies with a laser printer, and used ADJ Ikon Profiles to project the patterns down from a gantry 52ft above the ice. Talk about getting inventive with your lighting solutions to get the job done!

One of the stand out features of the International Children’s Winter Games’ impressive production was the archway through which this year’s talented young athletes entered the arena. To make the most of this feature, Eric decided on ADJ Inno Pocket Z4s, which were mounted on top of the archway truss and used to provide various color-changing wash effects thanks to its variable tight or wide beam angle and 10W quad-color LEDs.

“The Inno Pocket Z4s are versatile little fixtures, which we used in two different ways,” explained Eric. “First, we set them to white and a wide beam angle to illuminate the children as they walked through the arch so that the cameras could pick them up. Then, once the kids were out in the arena, we switched to tighter beams and recreated the colors of the flag for that particular national team. We also applied the same principle to the rest of the lighting rig. So, when the US team walked in waving their flag, the Z4s were doing high-energy chases in red, white and blue, while in the rest of the arena we had the Vizi Spot Pros projecting star GOBOs, the BSWs doing a vibrant red wash and the RXONEs shooting out white beams for the stripes.”

While the Vizi BSW 300s, Vizi Beam RXONEs and Vizi Spot Pros were no doubt the stars of the show, Eric also utilized a set of compact, battery-powered WiFLY EXR Hex Pars, whose hex-color LEDs and adjustable dual-bracket yoke ensured Eric could splash the blue backdrop in the perfect white hue for a sleek finish. Meanwhile, the truss pillars themselves were lit using ADJ Mega Go Par 64s – fixtures which, according to Eric, were purchased back in 2012 and are still going strong, having served him well for countless events. Which is a great testimony to the build quality and durability of ADJ fixtures.

“We also used two Entourage fazers to fill the entire arena! With the help of some fans behind them, to help fill those hard-to-reach spaces, we cranked up the Entourages and they did an amazing job of hazing the entire venue,” explained Eric. “By putting them on full power with the premium ADJ fluid, we were able to create some amazing beam-enhancing haze effects.”

All of this was tied together thanks to the ADJ Compu Show and myDMX 3.0 lighting control software. Programmer and operator Edgar Gonzales used Compu Show alongside an Elation Professional MIDICON II for the main lightshow, while Corey Hoffman was down on the ice operating myDMX to run the Z4s and Mega Go Par 64s.

Another challenge thrown at Eric and his team was the availability of access to the arena. With the ice used day in and day out for skating practice, programming of the lighting rig had to be carried out over night. “We had to go in to the rink after all the day’s activities had concluded, usually at midnight, and stay until sun up. We would fill the arena with haze and then start by doing all of our focusing and aligning: you have to make sure all of the lights are hitting their marks and perfectly spaced or it will throw off the patterns. Once that was done, we got to work programming and creating scenes. We had the script for the Opening Ceremony in front of us and designed specific scenes for each element of the show.”

Tying the two contracts together, Eric used the outdoor lighting for the International Children’s Winter Games to illuminate the outside of the arena in the five colors of the Olympic rings, providing a real spectacle and talking point for passers by. This was the icing on the cake for an incredibly memorable event. Eric was more than pleased with how the fixtures performed and his clients were impressed with the results too.

“They were very happy,” he told us. “Somebody even commented that our lightshow was equal to, if not better than, what they’d seen on the touring Stars On Ice figure skating show, and that’s one of the biggest compliments I’ve ever received. Stars on Ice is a huge production, using some very expensive fixtures. With that in mind, the extent of what these ADJ lights can do is pretty darn cool. Knowing the product so well was the key. I use these lights all the time and was confident that I could produce a great show with the ADJ fixtures. The results speak for themselves!”

By getting creative with his lighting setup, Eric was able to put the versatility and power of ADJ lighting to highly effective use without breaking the bank. His goal was to generate a stunning lightshow that really captured the themes and ethos of the International Children’s Winter Games – and, with ADJ’s help, he did just that.