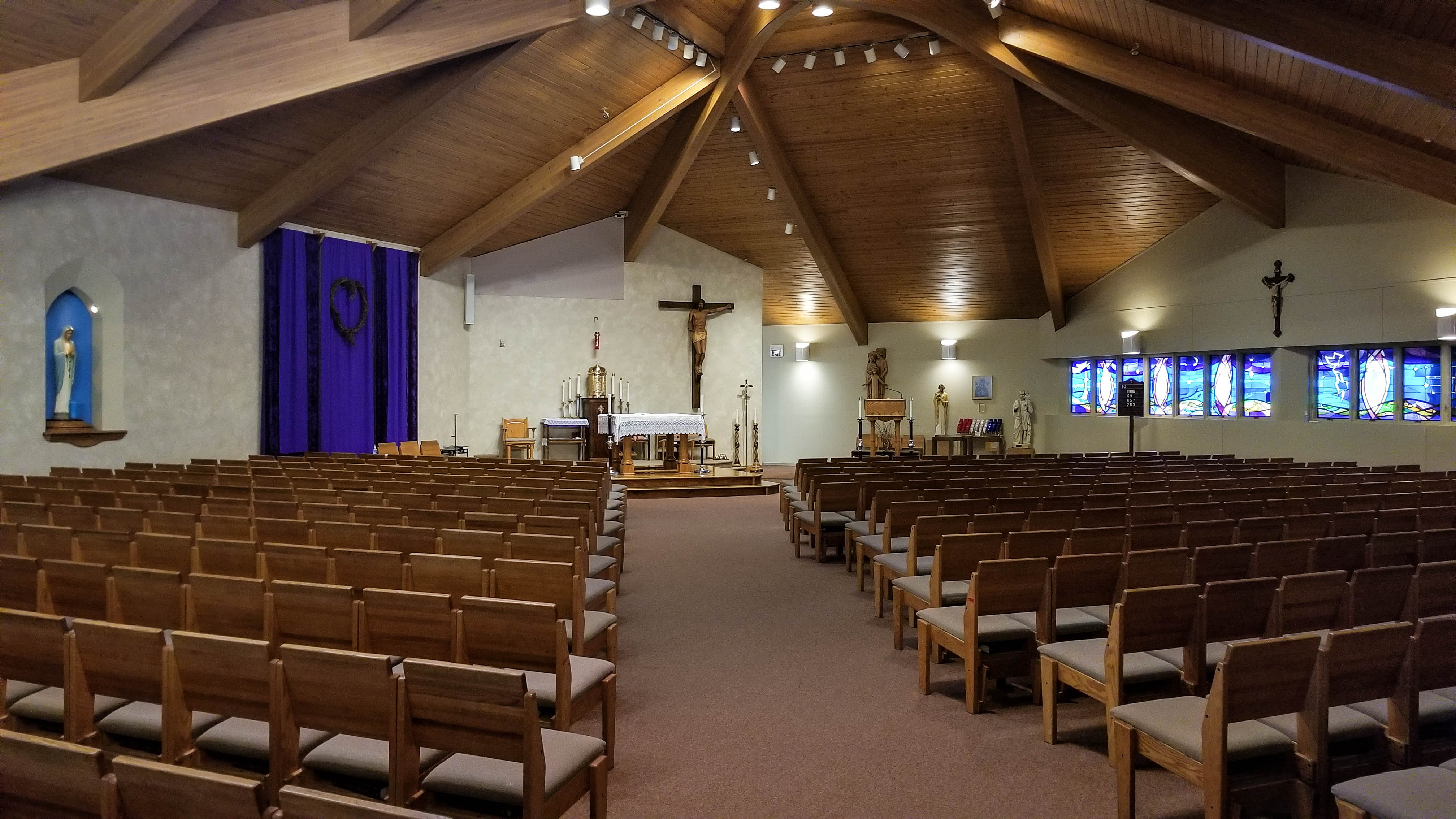 Marysville, Michigan-May 2019 – It is often said that less is more, and one could hardly find a better example of this than the new sound system at Saint Christopher Catholic Church in Marysville, Michigan. Founded in 1936, Saint Christopher has occupied its current building, located north of Detroit and barely a half-mile west of the U.S./Canadian border at the Saint Clair River, for more than 30 years. As with many traditional churches, Saint Christopher’s approximately 600-seat sanctuary is very reverberant, and its old distributed sound system left the congregation struggling to make out what was being said.

“The altar area was centrally located, and the seating went a 285 degrees around it,” recounts Wisnieski. “They lost a lot of seats with that layout. They had a new priest [Father James] who was a mechanical engineer, and he decided to redesign the space. We helped out with that project.” Rearranging the room improved things but did not alleviate all of the issues.

“It’s a very oddly shaped building, and they didn’t want a ton of speakers hanging in it,” Wisnieski describes. Instead, he installed the Renkus-Heinz ICONYX Gen5 IC8-RN, which houses eight purpose-designed 4-inch loudspeakers, each with a mini-array of three 1-inch tweeters, all controlled by eight channels of DSP and driven by eight channels of audiophile-quality amplification. This gives the IC8-RN the capability of developing up to four independent, steered beams, which Wisnieski thought could cover the whole church if the cabinet were strategically placed.

Wisnieski placed the IC8-RN on the wall behind the pastor, which seemed even more audacious than using a single array for an entire church. “People told me, ‘Oh, you can’t put the loudspeaker up front, behind the person speaking,’ because everyone thought it would cause feedback,” he chuckles. But thanks Renkus-Heinz’ precision beam-steering technology, Wisnieski’s calculated gamble paid off. Once properly configured, his solution not only proved highly effective but relatively easy to implement. “We didn’t have to do a whole lot,” he confirms. “I created two lobes: a very small lobe just for the front area, where the priest is sitting, and a bigger lobe firing over the priest’s head to the back of the room. The big lobe is programmed to start hitting the floor 25 feet out, so we don’t get feedback.”

The simplicity of the sound system made networking unnecessary, so signals from microphones and musical instruments run analog to a small QSC mixer, then analog again directly to the IC8-RN. A subwoofer is also installed in the loft to provide low end for the organ.

The small lobe delivered big benefits. “That small lobe is a good foldback monitor for the priest, as well,” notes Wisnieski. “It was nice to hear the priest tell me, ‘I don’t have to speak as loud because I can hear myself. I used to feel exhausted when I got done with the Mass. Now I can talk in a more relaxed voice, and I’m not straining.'”

Wisnieski’s bold design is a true win-win-win for Saint Christopher Church. A single cabinet, while not quite invisible, is hardly intrusive; the priest hears himself well and can speak normally; and, best of all, intelligibility for the congregation is better than ever before. Wisnieski reports, “People who had not been able to hear what was being said at services for 20 years came up to us the first Sunday we got the system running and said ‘This is the first time I’ve ever been able to hear clearly without turning up my hearing aid.'”