Four Services for the Price of Two

First Evangelical Free Church of Maplewood faced a positive problem. Our worship attendance grew at a healthy rate, and we had to ﬁnd a better way to use our available space. A new building seemed out of range, given the cost of land and construction, plus the time it would take us to complete a building project. We also knew we were not ready to take on the expense of a completely new facility. Building projects, in any event, would not resolve our immediate challenge.

As with an increasing number of churches, we decided to make use of video technology to increase the number of people we could serve while using our current facility. This would allow us to save millions of dollars over the cost of a new or expanded building. During a frigid retreat in January of 2012, our pastoral staff addressed the problem of growth and the limitations of our facility. Our 400-seat Worship Center was full during both of our Sunday morning services. The church had purchased land nearby with the intention of building a new facility, but we knew a new building was likely a decade or more away.

The pastors discussed and prayed over several ideas, but ultimately decided to open a second worship venue in another large space in the church. We decided to conduct two additional worship services to run concurrently with those in the Worship Center, and committed ourselves to ensure both services were perceived by attendees to be of equal quality and value. This meant that our Senior Pastor – actually, any speaker or preacher – would speak in both venues on a rotating, weekly schedule. Operating concurrent services allowed us to have four services for the price of two.

Running two concurrent services resolved many of the issues we faced, but created another challenge: If the services ran concurrently, how could we ensure that when the time came for the sermon, both services could naturally ﬂow into it? We settled on a solution whereby whichever service received the video would operate on a schedule that would be a minimum of ﬁve minutes behind the “live” service. The service receiving the video replay of the sermon would view it using a delayed feed. We reasoned that we could ﬁnd commercially available technology similar to the DVR technology used by cable and satellite TV providers and simultaneously record and playback the weekly message.

As Pastor of Worship and Music, I managed the planning process for the purchase and implementation of a new video production system to serve our new worship service plan. I contacted Alpha Video (a Twin Cities-based company) to design the system and integrate it into both the existing and new venues. We had to pay attention to a budget, of course, meaning we had to ﬁnd a reasonably-priced digital video recorder/player. The new system would have to be able to start the recording in the “live” venue and then have the recorded ﬁ le immediately available for playback in the “video” venue. Our system designer, Brian Mathison, called a number of vendors and presented us with two options. We ultimately selected the Leightronix LABvault-SD because it met two critical criteria: lowest cost and ease of use.

The LABvault-SD continuously records standard deﬁnition audio/video in an MPEG-2 container. Once recording begins, simultaneous playback is available after 30 seconds. We control the recorder via a Crestron web-based interface. Completed recordings can be transferred to a network storage device via FTP for long-term storage or later editing. We installed the same Extron video switcher in both venues making the output from the LABvault-SD simple to integrate. Alpha Video provided onsite training for our technical staff, but the Crestron interface is intuitive and user-friendly – making operation no more challenging than operating a DVD player. The administrative interface works via Internet Explorer. It provides system set-up, status and control and is simple to use. All of these features make the LABvault-SD ideal for volunteer staffed ministries like ours.

We designed a simple procedure for Sunday morning worship services. The “video” venue sets a schedule for the sermon to start replay ﬁve minutes after the sermon begins in the “live” venue. We use PlanningCenterOnline.com to plan both services, and use Planning Center Live to monitor both rooms as they progress through the morning. We also use this tool to communicate between the AV booths in the two venues and the production room.

As the sermon begins in the “live” venue, the tech staff in the video production room starts the LABvault-SD recording, and thirty seconds later cues it for playback. A preview monitor in the “video” venue lets that venue’s audio and video technicians know when the sermon video is cued for playback, after which one of them signals the worship leader that the video is ready. When the time comes for the sermon in the “video” venue, the video technician in the live venue switches the input on the Extron switcher to LABvault-SD and starts the playback. To further simplify our process, the “video” venue uses the first hour recording during the second hour, reducing the need to closely monitor timing.

We have used the system for more than a year without any major issues. We have found the LABvault-SD to be stable and consistent. When we had a minor difﬁculty setting up our FTP protocols, Leightronix support resolved the issue remotely. We have had no issues since. We intend to move to a HD version of the LABvault-SD when funds are available. Until then, we are happy with our current equipment’s performance. 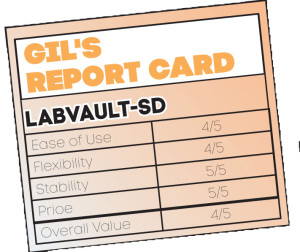 Since expanding our worship service format, we continue to see numerical growth and have reached the point where we are evaluating our next expansion. We have been able to reach this point in large part due to the performance of the LABvault-SD as an essential component of our video production system. Right now, we are unsure how to accomplish our next expansion, but knowing that there are tools like the LABvaultSD available leaves us conﬁdent that we will have the ﬂexibility to make even more creative use of our current facility.

Gil Fruchey is the Pastor of Worship and Music at First Evangelical Free Church of Maplewood Minnesota.