JVC Professional Video, a division of JVCKENWOOD USA Corporation, today announced a partnership with Broadcast Pix to save customers more than $3,000 on a multi-camera production system bundle through Dec. 31, 2017. 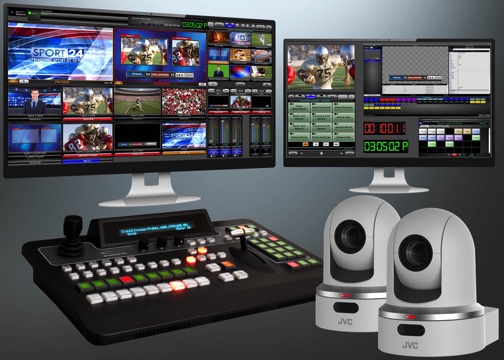 With the purchase of any Broadcast Pix Flint integrated production switcher and at least two JVC KY-PZ100 robotic PTZ video production cameras, customers will receive JVC camera control software (a $950 value) and a one-year extended warranty ($1,250 value) from Broadcast Pix. Plus, at time of purchase, dealers will provide an instant $450 rebate ($300 camera rebate plus $150 bundle rebate) for each JVC PTZ camera purchased.

Available in black or white housings, the KY-PZ100 features a 1/2.8-inch CMOS sensor and 30x optical zoom lens. Its f/1.6-4.7 maximum aperture delivers excellent low-light performance. Ideal for studio or field applications, it also offers HD streaming at a variety of bit rates with minimal latency, as well as on-board HD recording at up to 50 Mbps to a MicroSDHC/SDXC media card.

“Bigger is not always better. When you need video production in a non-studio environment, a compact solution is often the best solution,” said Steve Ellis, COO, Broadcast Pix. “This is an unbeatable bundle at an unbeatable price.”

“We are excited to partner with Broadcast Pix to offer this multi-camera production system,” added Lon Mass, vice president of sales and marketing, JVC Professional Video. “The combination of our PTZ cameras and Broadcast Pix’s Flint switcher is an affordable way to upgrade your church, school, mobile production unit, or government facility.”

Both the JVC cameras and Broadcast Pix switcher must be purchased new and at the same time from a participating JVC / Broadcast Pix dealer between Nov. 1, 2017, and Dec. 31, 2017. Customers should specify “JVC-BPIX” on their purchase orders to the reseller. Fulfillment of the Broadcast Pix products in this bundle is the responsibility of Broadcast Pix. For complete details, visit pro.jvc.com/pro/promo/bpix.